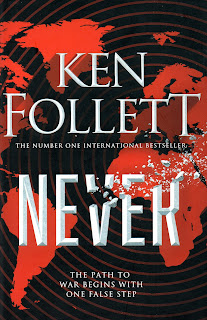 Ken Follett’s 800-plus page novel Never (2021) is a warning: small differences of ideology and policy can evolve, step by unwitting step, into devastating global conflict.

The US President is Pauline Green, a wife and mother; she is a moderate unlike her political opponent, Senator James Moore, who is a hawk threatening to challenge Pauline for the Republican nomination.

Tamara Levit is a CIA agent attached to the Chad embassy; she’s working with Tab Sadoul, an attaché at the EU mission there.

Kiah is a widowed mother of Naji, a baby boy, and lives beside Lake Chad.

Abdul Haddad is an undercover CIA officer tracking a consignment of cocaine, which is presently hidden in a bus.

Chang Kai is Vice-Minister for International Intelligence in Beijing. Kai has useful contacts in North Korea and in the United States.

The CCP President is Chen, a moderate, a far cry from the present incumbent.

In several cases their lives will become interlinked; we get to know and feel concern for them as individuals.

Tamara is Abdul’s contact; she passes on information he obtains which is then used to close down insurgents’ camps through lethal force. Kiah joins a group of migrants on the smugglers’ bus, along with Abdul, and a friendship develops. Chad and neighbouring Sudan are at loggerheads. During an incursion an American corporal Ackerman.is killed. The weapons used by the insurgents were North Korean. Protests are made, to no avail. An assassination attempt is made on the president of Chad and reprisals result. And so it begins – tit-for-tat diplomacy, escalating gradually…

As usual with Follett, the book is a fast read. He and his consultants have amassed a great deal of insider information regarding the workings of both the US and Chinese political machines. There’s also action, bravery, political chicanery and betrayal.

The sections involving Abdul and Kiah, while interesting and suspense-filled, are secondary to the main thrust of the novel. They do provide a human dimension to the modern plague of people smuggling, however.

As evinced by the outbreak of the Wuhan virus, the Chinese government is reluctant to lose face, and this attitude could well have grave consequences for the world…

Thank heaven for an author who doesn’t write ‘she thought to herself’; instead we get, ‘she said to herself’ (p64). (Honestly, who else can you ‘think to’?)

While there’s no real confusion because the individuals are on different continents, one wonders why Follett chose Kiah and Kai for two character names. Generally, writers are advised not to use similar-sounding names (though even Tolkien slipped in Saruman and Sauron!)

Fatima asked Jadda: ‘How will we know what to do?’ (p164) This should be Kiah asking Jadda. Fatima knows this already, being in the system.