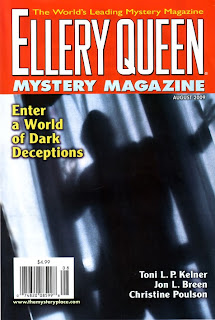 An excellent collection of nine short stories, showcasing a variety of writing styles and talent. ‘Central Islin, USA’ by Lou Manfredo concerns retired cop Gus Oliver and the puzzling murder of a German immigrant in her bakery. There’s a very good reason why the story is set in 1959 – the flavour of that time is neatly captured too. Even though I guessed the culprit 7 pages in, I still enjoyed the story.

Kieran Shea’s dark tale ‘The Lifeguard Method’ is a modern story about a sort of private detective Charlie Byrne. He’s acting for the father of a kidnapped boy – but it isn’t what it seems. All about gratitude and the lack of it, with consequences. Another Shea story can be found in the online storyzine:

Intriguingly, there are a number of period pieces in this issue. Next up is ‘A Cabinet of Curiosities’ by Christine Poulson set in England at the time of the persecution of Roman Catholics. Interestingly, written in the present tense.

‘A Voice from the Past’ by Art Taylor concerns Evan and his connection with a guy from his past. Quite creepy, this, as the old boy from Evan’s school haunts his waking and dreaming moments.

‘The Shanty Drummer’ by Robert Lopresti is a moral tale about corporate business and ambition – or lack of it. The young black drummer of the title seems to be a metaphor for the fate of those who strive without thought of others.

The translated crime tale is ‘Snow on Bloedkoppie’ by Bernhard Jaumann. It’s set in the author’s home of Namibia and seems to possess elements of the supernatural – until the final twist.

‘Death will tie your kangaroo down’ by Elizabeth Zelvin starts out as an amusing encounter with an obnoxious yet perversely likeable (!) Australian drifter. Before the jokes at the expense of the Aussie can become tiresome, the guy is found murdered. The quest to locate the murder seemed a little rushed and lacking in drama but there were plenty of good lines along the way.

I started out thinking I wasn’t going to like ‘Fake Resumé’ by Jon L Breen as it appeared to be a lecture by two cops, Berwanger and Foley during a creative writing class. But the guys grow on you, as does their humour. Unusual.

Lastly, we travel to 1680 in ‘The Pirate’s Debt’ by Toni LP Kelner. It’s an epistolary story, written by a lawyer who has been abducted to plead the case of a murderer on a pirate ship.

A book review and also blog bytes by the busy scribe Bill Cryder complete the contents of these 112 pages. Check out the website too – www.themysteryplace.com.
Posted by Nik Morton at Friday, July 17, 2009 3 comments:

A recent online group discussion on writing about brain damage prompts me to republish this prize-winning short story; the judge’s comments are at the end. It is based on a real life. After the competition, it was published in the small press magazine Scribblers’ News. It's included in my collection of supernatural short stories seeking a publisher and also provides the collection's title.

For what are men better than sheep or goats
That nourish a blind life within the brain
If, knowing God, they lift not hand of prayer
Both for themselves and those who call them friend?
- The Passing of Arthur, Tennyson


Not long now. My tenacious hold on this mortal coil is weakening but I have no regrets as I look down and for the first time in sixty years see myself, lying there, still trapped within that faithful, old husk. There is no bitterness in me; the poor body served me well enough, impaired as it is: it kept me going until I met her and fifteen years beyond.

This floating sensation is unique. Perhaps it is euphoria, at being able to see, even if as through gauze; an out-of-body experience, a precursor to the final journey. Now I find myself with an adequate way with words, at long last able to express myself.

These gifts, of sight and using words, are blessings, but compared to her they are meagre.

For too long have my links with the world only been through touch, taste and smell. Before I die I would like to hear music rather than sense the marvellous vibrations.

Born deaf seventy-five years ago, I received little help. They were unenlightened times, at least in my village. People meant well, but shied away when I made strange noises, inept struggles to seek understanding and love.

Now, I realize they probably thought I was mentally retarded. Even if I had been, that was no reason to shun me. But people are like that. At least the ones I saw were - though that was only until a hereditary illness left me blind on my sixteenth birthday. The sudden immersion into perpetual darkness was horrifying, worse because I couldn't talk about it; nobody had bothered to teach me to vocalize.

I never knew my father: apparently, he deserted us, unable to cope with my presence, as if I was a stain on his manhood.

My mother ministered to my physical needs, but she was unable to provide any abiding sensory stimulus. That day when she did not come to get me up was almost as comparable to my abrupt descend into blindness. She'd died in bed. Trembling, I barged into her bedroom. She was cold, lifeless. I cried: I was intelligent enough to know that my existence was destined to change.

The next couple of days were a waking nightmare; strange, to talk of nightmares, when every waking moment is night.

(In retrospect, I know I should have fought the blindness Fate had thrust upon me, by familiarizing myself with my near surroundings, by going out with a stick. I should have learned to speak or at least voice comprehensible sounds. In mitigation, I can only say that if someone had guided me, if someone had had faith in me, then I would have managed these accomplishments. Instead, during my seeing years I was not even taught the rudiments of reading.)

As the well-meaning representatives of the Local Authority shepherded me from pillar to post, I tended to withdraw into my shell. Any attempts at communication were considered the movements of a severely retarded adult; I had long ago smelled their fear of me; perhaps my frustrations were interpreted as violence. I don't know; I can't remember...

What I can remember, though, is when she visited the home for the blind fifteen years ago; I was sixty.

I remember her first touch, gentle, inquisitive, her curiosity almost palpable in the air: I must have sensed her wish to communicate with me, for with great difficulty I refrained from responding in my usual slightly uncoordinated manner. Instead, I smiled.

Now, blessed with hindsight and visual memories previously unavailable, I can see how inane that smile must have appeared. But it offered her encouragement.

Over the weeks, and I had plenty of time, she gained my trust, and I hers.

She began to write letters on my palm; simple alphabet shapes, then stringing them together to form words, usually of things to feel and identify by shape and smell. 'Spoon' was one of my first words. She persevered, and I never gave up.

Eventually, we formulated gestures for 'Yes' and 'No'. I could almost feel her smile when we established this communication: it will probably be like this when we converse with another species, if we haven't already done so with the sadly persecuted whales...

Yes, with my pre-death blessings has come understanding of the world around me, a world taken so much for granted by the majority.

When she was permitted to wheel me outside into the garden it was a glorious sunny day. I delighted unashamedly in the sun on my face, in the breeze on my cheeks. Oddly, the scent of flowers seemed richer, more powerful in the gardens than in vases.

Months later I learned she had a family; they too had taught themselves some blind and deaf language and imparted it to me.

My joy was difficult to contain; I was being included in a family after so many many years.

I managed to build up a vocabulary of over two hundred nouns and a dozen or so abstract words like 'hot' and 'cold'.

Until my near-death astral revelations, though, I could not comprehend words for 'love', 'sad' and 'happy', so no matter how many times she showed me them and I could write them with letter-shapes, I couldn't understand them. Now I can. And of course I realize that you don't have to understand the words to feel their meanings. To me they are 'feelings-words', and I have experienced those emotions. I was sad on the days she or her family were unable to visit, I was happy when my surrogate family came.

A couple of years later I was taken to a Christening and was even allowed to hold the baby. It was a peculiar sensation, holding a young life in my arms. Infants are so trusting, so gentle and soft. I smiled, suffused with a glow of happiness, to know that this child was entire, not the guest of an imperfect body.

It must have been as a result of the christening that she learned that I had been confirmed shortly before being stricken blind.

A half-century after that fateful time I was offered the wafer and the wine; solemnly, I handed the chalice back, having taken my delicious sip. The glow of being received by her family was equalled by that moment; on my knees, I leaned back and smiled, content: I truly belonged again.

For fifteen years they included me in their family, in their world. They gave light to a blind man, faith to a nonentity, and words to relieve my silence.

They know I am failing fast.

All those years and I have never seen her face.

It is a gentle, motherly face, with tear-brimmed eyes of hazel, her auburn hair slightly streaked with grey.

I remember how she last saw me, rocking on the chair in their garden, laughing out loud. I don't know why I was laughing, and I'm sure she doesn't either. Perhaps it was a presentiment of my imminent departure.

I so want to wipe her tears.

I can hear music, music of the spheres: all the beautiful music through the centuries flooded into my mind.

I smiled, knowing she would see that smile as I let go.

Judge's comments:
'I read a lot and like to think that I’m fairly hardened to the human experience. Your story, Nourish a blind life, however, moved me enormously. With a powerful understanding you avoided any mawkish melodrama. The ending, although sad, gave satisfaction knowing the narrator was soon to be free! Thank you.' – Eve Blizzard, dramatist and author
Posted by Nik Morton at Thursday, July 02, 2009 12 comments: