Here is a homage to a particular writer who was influential in creating a sub-genre of horror. It urges readers of the story to go find the book.

Also there's a plug for A Fistful of Legends. Sadly, the editor of the magazine - Costa TV Times - is moving on, so I'll have to wait and see what the new editor likes...
Posted by Nik Morton at Monday, June 21, 2010 3 comments:

Review of A Fistful of Legends 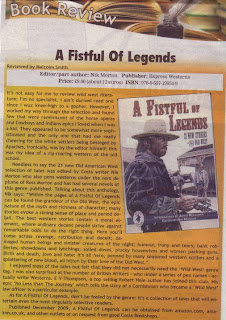 The weekly English newspaper here on the Costas runs a book review. This time around it's the turn of A Fistful of Legends. Verdict: the review liked the stories and reckons they'd appeal to a wider audience than just fans of the western. I reckon that many Black Horse Western books would do the same too, if only people would cast aside their reluctance to pick up a 'western'.
Posted by Nik Morton at Monday, June 21, 2010 3 comments: 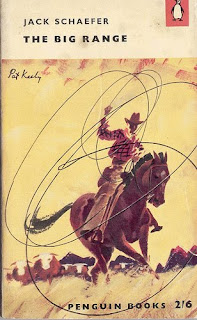 The first tale in Modern Short Stories is by Jack Schaefer: ‘Jeremy Rodock’, which is taken from the collection The Big Range. The story's narrator isn’t named. He’s looking back at the time of which he writes, when he was ‘young then with a stretch in my legs, about topping twenty, and Jeremy Rodock was already an old man.’ Whenever Rodock talks to the narrator, he calls him ‘son’. This is a good ploy by the writer: being unnamed, the narrator almost becomes invisible, because what he reveals is not about him but his subject, Rodock.

The narrator works for Rodock, who supplies quality horses to stage lines. When about forty mares and their foals go missing, Rodock and the narrator set out to find them. During their tracking, horse know-how is neatly divulged until finally they come upon the herd. Their discovery is two-edged, however. The rustlers played a mean and cruel trick that meant Rodock couldn’t herd the animals back to the ranch. It then became a battle of wits between him and the rustlers. An eventual showdown was inevitable, but that too didn’t quite boil down to a shootout. The nature of Rodock the man meant that the battle of wills continued with the rustlers. It would be churlish to divulge more, save that in his own words Schaefer strives to ‘depict the raw material of human individuality through action and plot’. He viewed the Old West as a place ‘in which energies and capabilities of men and women, for good or for evil, were unleashed on an individual basis as they had rarely been before or elsewhere in human history’. He tended to pit a strongly individualised character ‘against a specific human problem and show how he rose to meet it’. Schaefer’s stories are about individuals – an overused word above – but valid nevertheless.

This isn’t the only eponymous story Schaefer has written. Not surprising, really, since Schaefer was profoundly interested in characters and how they fit into the world.

The next tale is ‘To build a fire’ by Jack London and he also uses an unnamed character, though this story is written in the third person. 'The man' is stranded alone in the Yukon, with only a half-wild dog with no name for company. And the sun wasn’t due to fill the sky for many days yet; instead, there was ‘an intangible pall over the face of things, a subtle gloom that made the day dark…’ We don’t know why the man was here, though he was intent on meeting up with ‘the boys’ in camp before long. Unfortunately, he underestimated the intensity of the cold. The dog probably only stayed with him because he had matches and lit fires to create warmth. But there are only so many matches in a box. And the numbness that swamps the body’s extremities cannot be imagined until it happens: it is devastating. Throughout this tale, London gives us insights into the land and the climate and the basic lore of survival, based on his own experience.

London’s story is a fitting companion piece for Schaefer’s. Both take place in primitive wild and lonely lands. Man is surrounded by nature that is beautiful and threatening. Schaefer relates about the struggle between men of strong will, while London’s tale is about man’s conflict with awesome nature. London employs many good phrases, notably, ‘The cold of space smote the unprotected tip of the planet, and he, being on that unprotected tip, received the full force of the blow. The blood of his body recoiled before it.’ Great stuff and memorable.
Posted by Nik Morton at Thursday, June 03, 2010 7 comments:

It's about victims, not statistics 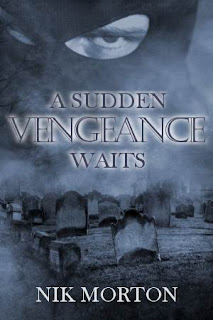 I'm pleased to reveal that my modern vigilante novel, A Sudden Vengeance Waits, set in the fictitious town of Alverbank on the south coast of Hampshire has been accepted by Solstice Publishing. The title comes from a poem by Alexander Pope.

The blurb may be something like this: What conditions create a vigilante? Is it a personal tragedy, the loss of a loved one, or the frustration over the inadequacies of current law enforcement? In the broken Britain of today, the Knight family attends the funeral of Gran, killed by a burglar. But the Knights aren’t the only victims of unpunished criminals. There are plenty of others hurt and grieving in the south coast town of Alverbank. It’s about victims, not statistics. The vigilante breaks bones and cracks heads of those guilty individuals who cause pain without remorse.Who is the vigilante? He – or she – is called the Black Knight. Will the Black Knight eventually cross the line and kill? Somehow, the Knight family seems involved and is going to suffer.

The excellent atmospheric cover shown here was produced by Solstice in a matter of two days. The editing and publication process will however take a little longer...!
Posted by Nik Morton at Thursday, June 03, 2010 6 comments: