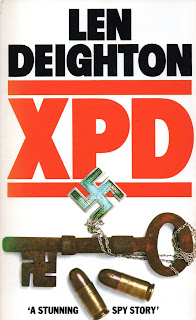 In my 1987 copy of Len Deighton’s 1981 novel it reveals it had been reprinted seven times, so it was certainly popular in the 1980s. Along with other Deighton novels, it is being re-issued as a Penguin modern classic. As you can gather from the dates above, I’ve come to it very late indeed.

XPD refers to ‘expedient demise’ – the fate of anyone who knows too much and is a verifiable security risk.

Set in 1979, ostensibly it’s about a projected movie being made concerning the plunder of German gold in the final phases of the Second World War: that’s the McGuffin. However, it is not so much the gold as certain documents that were also sequestered at the time. It’s most odd that these potentially embarrassing items have not surfaced in the intervening thirty-nine years.

The Director General of MI6, Sir Sydney Ryden, is introduced on the first page. But virtually every occasion thereafter he is referred to as ‘the DG’.

Boyd Stuart, a field agent and son-in-law to the DG is tasked with recovering certain secret documents from the stolen items – items that were rumoured to be source material for the film. The documents concern the secret whereabouts of Winston Churchill on June 11, 1940; did he have a meeting with Hitler in an attempt at making peace? Unlikely though it seems.

Stein is an American, ex-Army, one of a group who purloined the gold and vital documents, and all lived well off the proceeds. Somebody, doubtless for political reasons, wants those documents released to create a wedge between the US and Great Britain. It has to be the Russians… There are now a string of deaths connected with the documents…

The best bits were the flashbacks to the war itself, with Stein. Deighton’s extensive knowledge of the German forces was evident also.

There is a twist at the end concerning ‘the DG’, which is sort of left hanging.

The storyline is unnecessarily complex, but can be followed, even with several protagonists involved. The chase amidst the Hollywood stage setting was probably overdone even in the 1980s and seems contrived here. Sadly, for me, it didn’t hang together, despite my enjoyment of Deighton’s style and amusing asides.

On p210 a man with a half-grown beard introduces himself as Jimmy on p211.  Next page, we have ‘Here’s your Mr Stein,’ said the bearded man.

(Why revert to ‘the bearded man when we now know him as Jimmy?)

(Why use ‘the man at the stove again when he could have been introduced as Bock earlier?