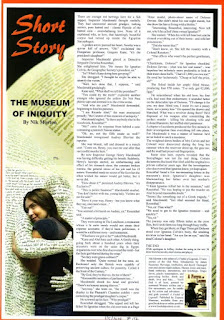 The COSTA TV TIMES weekly magazine out here in Spain has published my hundredth short story. Entitled ‘The Museum of Iniquity’, it’s a fun murder mystery, which also happens to use 36 titles from the plays, short stories and books of Jeffery Archer!

There’s also a plug for the anthology A Fistful of Legends.
Posted by Nik Morton at Friday, April 30, 2010 8 comments: 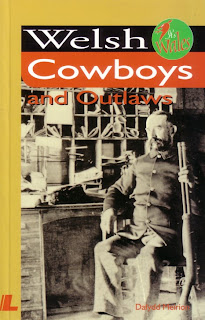 We all know it's a small world, and getting smaller with the aid of the Internet. Not so long ago, I was browsing in a shop here in Spain when I picked up and bought one of those UK nostalgia books packed with old photographs: Monkseaton and Hillheads (Whitley Bay). Inside was a photo of the house where I lived for most of my first seventeen years of life!

Another shop nearby stocked a couple of It’s Wales books, short 92-pagers, and I was drawn to this one – Welsh Cowboys and Outlaws by Dafydd Meirion (2003).

While the prose is slightly repetitive – ‘decided’ and ‘many’ are two overused words – the information, gleaned from a number of intriguing references, is interesting and possibly a good source for a plot or two of a western or historical saga of the Old West.

Meirion tells us that perhaps 250,000 Welsh left Wales for America – compared to 4.5 million from Ireland. The largest proportion originally settled in Pennsylvania (17%), while the rest wended their way west as the expansion gained pace. Of the 10,000 whites who died during the treks westwards, apparently only 362 were killed by Indians. Most succumbed to disease or the weather or renegade whites and Mexicans.

He also points out that Hollywood rarely depicts the ethnic split of cowboys, for example: only 63% were white; 25% were black; 12% Mexican.

He touches briefly on a wide range of Welsh characters. Isaac Davis, the Mormon renegade who raided settlements; the James brothers, whose great-grandfather was a Baptist minister from Pembrokeshire and emigrated to Pennsylvania; Sheriff John T Morris, who gunned down Belle Starr’s husband; Frank Jones and John Reynolds Hughes of the Texas Rangers.

Edward Davies from Llanrwst entertained in saloons; as did John G Jones from Bethesda, north Wales. Morris Price left Powys and travelled to Illinois where he started a small ranch which grew into one of the biggest. John Rowlands who was raised in a workhouse in St Asaph near Denbigh emigrated to America and changed his name to Henry Morton Stanley and became a famous journalist and of course tracked down Dr Livingstone in darkest Africa. Then there’s Robert Owen Pugh of Dolgellau who married the granddaughter of Chief Blue Horse of the Oglala Sioux; quite a character, Pugh, and a staunch friend of the Indians in their hours of need. And there are plenty more in these few pages. Also mentioned briefly is Buffalo Bill’s Wild West Show visit to Cardiff; the locals didn’t take kindly to local lasses walking arm in arm with Indians!
Posted by Nik Morton at Sunday, April 11, 2010 6 comments:

On the trail of 'last chance' Morton


This week’s Costa Blanca News has run a full-page article about my western writing.

Here is the page (Expertly joined by my old pal Neil from two scans ).


Inevitably, a few things got lost or altered in translation from interview to page. Needless to say, I don’t write ‘how is y’all’ dialogue, contrary to what is suggested… The article states that I have ten westerns under my belt, when in fact I’ve only got four – though my latest sale is my tenth book printed/accepted. (I’ll just have to get busy and write those other six pronto!) Also, when I studied ten BHWs and analysed them, I thought that I could write one too – I didn’t think I could ‘do better’. Such quirks make for a better article, I guess!

The Costa Blanca News is sold north and south along the Spanish costas. As to whether it will galvanise any readers into buying Black Horse Westerns, well that's another question without an answer...
Posted by Nik Morton at Friday, April 02, 2010 5 comments: