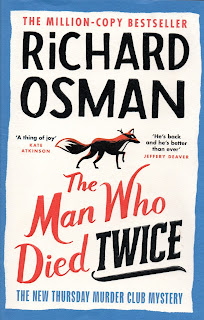 Richard Osman’s second cosy crime novel (2021) is as enjoyable as his first.

The members of the Coopers Chase Thursday Murder Club are meeting again. But it seems that Elizabeth is somewhat distracted. She’s had a letter, an invitation from a man who was in her past and should have stayed there. Despite herself, she is intrigued and meets him…

And so begins a new mystery, with the prime issue being a horde of diamonds stolen from the mafia. Also involved is MI5.

We meet again Joyce, as amusing as ever as she pens her diary, psychiatrist Ibrahim, who suffers a crisis, and old trade unionist Ron. They’re keen to help – or is it hinder? – Elizabeth. Bogdan is also called upon to provide muscle and any heavy lifting.

The life of DCI Chris Hudson has taken a dramatic upturn. He’s romancing an attractive woman and it could turn out to be serious – much to the surprise of his colleague PC Donna De Freitas. These two are trying to find evidence to be used against the local drug dealer Connie Johnson.

The story is bookended neatly with a new sympathetic character, Sylvia Finch.

From the outset and all the way through Osman’s style and humour enhance the telling and characterisation. It isn’t laugh-out-loud but there’s a smile raised on virtually every page. And, as with the first novel, Osman exhibits his affection for these old folk and humanity in general.

There’s a twist or two, terrible but not graphic murders, and even some suspense. Several threads are cleverly and neatly combined satisfactorily.

The title is apt, and can be construed literally or, sadly, medically when relating to a particular devastating illness.