CAPE FEAR – The book of the films

Written in 1957 by John D. MacDonald, The Executioners has the distinction of being filmed twice – in 1962 and 1991. MacDonald died in 1986 so didn’t get to see the Scorsese remake. The title was changed to Cape Fear by Gregory Peck, who produced and starred in the first film. I have to agree with Peck, The Executioners is not really an appropriate title for the book and its theme. (The Executioner series featuring Mack Bolan by Don Pendleton didn’t appear until 1969). 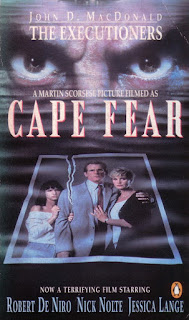 It’s 1956 and Sam Bowden is a dedicated lawyer, a happily married man with a lovely wife, Carol, and three children, Jamie, Bucky and Nancy. Way back in 1943, Bowden was a First Lieutenant on the Judge Advocate General’s Department and became a prime witness in the trial and conviction of staff sergeant Max Cady for the assault on a young woman in an alley. Significant memory – ‘I hard a whimpering in an alley. I thought it was a puppy or a kitten. But it was a girl. She was fourteen.’

Cady got life, but was let out after thirteen years. And Cady began stalking Bowden.

There was no law of harassment in those days. The law seemed helpless, as did Bowden. ‘He swam out with furious energy, but he could not swim away from the sticky little tentacle of fear that had just fastened itself around his heart.’ MacDonald’s prose is littered with gems like this. Another: ‘He could have been a broker, insurance agent, advertising man – until he looked directly at you. Then you saw the cop eyes and the cop look – direct, sceptical and full of a hard and weary wisdom.’

All of the characters are deftly drawn, particularly Bowden’s wife. Although there’s a pall of incipient doom hovering in the absent guise of Cady, there’s humour too. ‘Carol was a good but emotional cook. She talked to the ingredients and the utensils. When something did not work out, it was not her fault. It was an act of deliberate rebellion. The darn beets decided to boil dry. The stupid chicken wouldn’t relax.’

Cady issues veiled threats, but never in anybody else’s hearing. Even when the Bowdens’ dog Marilyn is poisoned, there’s no evidence that it was Cady. In order to protect his family – ‘his four incredibly precious hostages to fortune’, Bowden arrives at the unpalatable conclusion that he must go outside the law to deal with Cady.

Near the denouement, MacDonald returns to that significant memory. ‘… heard a faint mewling sound, a hopeless sound of fright and pain and heartbreak so like the unforgettable sound he heard long ago in an alley…’

The book begins and ends with the family on their boat, but unlike the movies the vessel doesn’t play any notable or dramatic part in the story. The beginning is a slow fuse, not recommended in modern thrillers. But it works because MacDonald paints a happy family, creating characters you’re going to care for and worry about. The ending, while realistic, is quite tame by modern standards and much of the action occurs off-screen, which adds to the psychological concern but diminishes the graphic assault on the senses. The ending lingers and perhaps shouldn’t – the screenwriter’s axiom is ‘enter late, leave early’ – and yet it’s a satisfying ending, the calm after the storm. Both Mitchum and De Niro bring suitable menace to a villain who doesn’t have to be in every scene to yet dominate the entire film. As Max Cady does in the book.
Posted by Nik Morton at Friday, November 02, 2012 No comments: