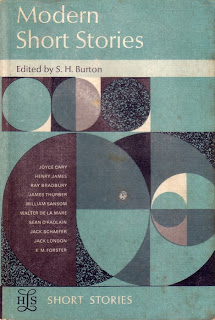 I have a rather large home library of unread books. They’re unread because I tend to keep buying new books before I’ve read the earlier purchases. My excuse is that books have a short shelf life in bookstores…

My curse is that I’m interested in many subjects so I collect non-fiction and fiction books within a great variety of disciplines and genres. From time to time, I’ll pull off my shelves a book or two I haven’t got round to reading; many of these are short story anthologies. As a writer of short stories, I like to immerse myself in this particular art-form, in an attempt at avoiding any staleness of approach in my own writing. As they say, writers should read.

A long time ago, in the early 1970s, I picked up a paperback entitled Modern Short Stories (1965), primarily because it contained ‘The Secret Life of Walter Mitty’ by James Thurber and stories by Ray Bradbury, Jack London and Jack Schaefer. It’s designed as an educational tome with an interesting Introduction and Notes at the end. The editor is S H Burton, MA. If you write short stories, then it stands to reason that you should read them.

Encapsulated, the introduction explains what a short story should contain. When the story ends, something that matters has happened; there has been movement. Plot in the story imposes a pattern. In addition, the writer is concerned with his characters and with his setting. And, finally and most significantly, ‘the short story involves values of one kind or another’.

Burton sums up very well, that ‘values embodied in the story will usually be expressed through the plot, the characters, the setting – and by the way in which the story is written.’ The style will be the guide as to the writer’s sincerity. ‘The best writers try to work unobtrusively, presenting their view of life through characters involved…’ It’s interesting that the editor labels the first two tales in this collection, ‘Jeremy Rodock’ by Jack Schaefer and ‘To Build a Fire by Jack London’ as ‘adventure stories’, not westerns.

In conclusion, Burton spells out what should be obvious to the writer. Short stories are of limited length, originally aimed at periodicals that have only so much space on offer. This imposed economy of words means that words must not be wasted. Every word must count in creating the world of the characters involved. Each word must ‘purposefully contribute to the overall effect’. A novelist can apply equal weight to plot, character and setting; a short story writer doesn’t have that luxury so must choose which to lay emphasis upon, the other two simply supplying just enough to maintain the illusion of reality. So a short story can be about character, or plot or the setting itself; yet in the final analysis it should illuminate an aspect of the human condition. That aim requires craftsmanship and dedication. 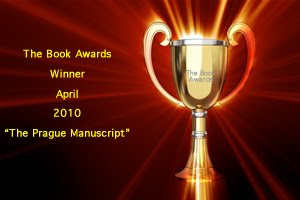 I was surprised and pleased to win the April bookaward for my thriller The Prague Manuscript. See: http://www.thebookawards.com/News.html

It seems I'm in good (though much richer) company with The Time Traveler's Wife winning in March. The nominations (which stand for the May voting are many, but among them) are: The Lovely Bones (reading this at present, remarkable first novel), Eclipse, The House at Riverton (no relation), The Vampire Diaries, Atonement, The Shipping News, The Lost Symbol, 44 Scotland Street and The Tarnished Star.

Pop along and vote, if you see one of your favourites nominated - or nominate your own favourite.
Posted by Nik Morton at Wednesday, May 19, 2010 2 comments: 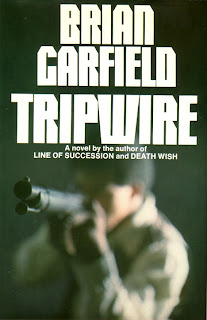 I was loaned this book by my Swedish friend Iwan. It’s one of his favorite books. This edition is a US hardback, 2nd printing in 1973 and signed with a personal note from the author dated 1975. The cover picture is poor and though relevant the title isn’t particularly good, either; yes, much later, Lee Child used it too. The cover calls it a novel, yet it is a western; maybe this is because Garfield has a very good track record with best-selling books in a variety of genres and the publishers feel the book transcends the genre. These are minor quibbles, however.

This is a great story, tightly written in 185 pages.

Buffalo soldier Boag helps out with a gold heist only to be double-crossed, thrown overboard from a steamship and shot. Doggedly, he tracks the men who robbed and hurt him. Boag is a believable character and we take the hard long journey with him. There are setbacks. He meets a variety of individuals, helps some and others help him. He’s a likeable man, but you don’t want to cross him.

The denouement is riveting and exciting. Highly recommended.
Posted by Nik Morton at Monday, May 10, 2010 3 comments: 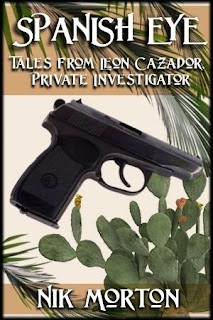 I’ve just signed a contract with Solstice Publishing, USA for this book of 21 short stories featuring Leon Cazador. The stories were published between 2005-2009 but I have rewritten them for this collection.

The Solstice cover was designed within a day or so and I reckon it’s very eye-catching.

The book still has to go through the Solstice edit process so I don’t know yet when it will be available as an e-book and a print book. Watch this space.

Private Investigator Leon Cazador is half-English, half-Spanish and wholly against the ungodly. Sometimes he adopts an alias, Carlos Santos: he is a modern day Simon Templar, willing to hold back the encroaching night of unreason and help the gullible and downtrodden. He combats drug-traffickers, grave robbers, al-Qaeda infiltrators, misguided terrorists and conmen. Dodgy Spanish developers and shady expat English face his wrath. Traders in human beings, stolen vehicles and endangered species meet their match. Kidnappers, crooked mayors and conniving Lotharios come within his orbit of ire. Vengeful Chinese and indebted Japanese are his friends – and his enemies. Leon Cazador fights injustice in all its forms. It’s what he does.
Posted by Nik Morton at Saturday, May 08, 2010 10 comments: