THE HEART OF DANGER - Book review 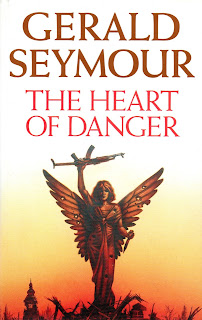 Gerald Seymour’s 1995 novel is another one of his authentic thrillers touching upon a gut-wrenching contemporary issue – this time, the Bosnian conflict.

Seymour uses a framing device – an SIS official is reviewing a particular file of events that occurred a couple of years earlier, in 1993. Bill Penn, an MI5 agent who was dismissed, now works as a private investigator – mainly chasing debts and errant husbands and wives. Then he is hired by Mary Braddock. Her daughter Dorrie went missing in 1991 and her body has just been exhumed from a field’s mass grave in former Yugoslovia. Mrs Braddock wants to know how and why Dorrie died.

What begins as a lucrative easy task develops into something darker and more meaningful and moving. Gradually, Penn gets to know the late Dorrie through witness statements. Dorrie’s mother had despaired of her daughter; they’d constantly been at loggerheads. Yet this wasn’t the young woman Penn learned about.

‘It’s always the people who are smug and complacent who send young men across rivers, through minefields, into the heart of danger, and in their arrogance they never pause to consider the consequences.’ (p322)

Despite official censure, Penn goes behind enemy lines in a bid to not only to seek the truth about Dorrie’s brutal death but also to bring to justice the person responsible.

This is a grim tale, with the raw background of a dirty little war that featured genocide and ethnic cleansing. Towards the end it gets extremely tense and harrowing.

Heart-breaking in many instances.

Penn uses a mercenary called Ham as a helper. What’s interesting is that Seymour uses an ex-special forces character called Ham in his 2003 thriller Traitor’s Kiss; and not the same guy!