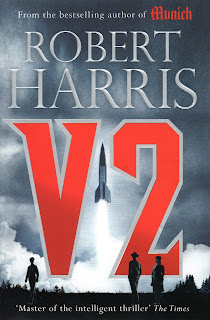 Bestselling author Robert Harris meticulously relates in this novel events that take place over five days at the end of November 1944, involving both British and German protagonists in the Second World War.

On the German side is rocket engineer Rudi Graf, friend and associate of Wernher von Braun, working on the new V2 rockets that can break the sound barrier and are unstoppable, unlike the earlier V1s. Like von Braun, Graf dreamed of building spaceships that could reach the moon, but the only way to finance that dream was to engage with the army. Hitler was won over by von Braun and development was well under way by November 1944. They were firing several per day at London with devastating effect.

On the British side is Kay Caton-Walsh, an officer in the WAAF, who experiences first-hand the explosive effects of a V2 when in London conducting an affair with a married senior officer. Shortly after her close shave with death, she is recruited to join a select group on a mission in Mechelen, in newly liberated Belgium. Their task is to track the parabolic course of launched V2s, aided by radar reports and information of the coordinates of the actual hit, working backwards armed with slide rules and mathematical calculations to identify the launch sites for RAF bomb attacks.

As you’d expect from an accomplished writer, you’re speedily involved in the lives of these two characters and the realistic detail and characterisation of everyone puts you there.  There is added tension as you follow the track of a deadly V2 on more than one occasion.  Also, the forced labour by prisoners is duly acknowledged; some 20,000 slave labourers died in the manufacture of V2 rockets. Yet at no point did I feel that the story was spoiled by being swamped with technical detail.

THE COMPLETE SCRIPTS – SEASON ONE 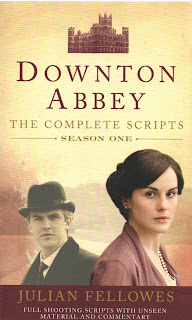 Creator and writer Julian Fellowes has produced the full shooting scripts of the first three seasons of the phenomenally successful TV series.

This is the book of the first season.

In addition he has added scenes which had to be cut plus countless footnotes commenting on many aspects of the show.

Even if you haven’t seen the series, if you're a writer you could glean a great deal from reading this book’s 396 pages. Laid bare are how dramatists set scenes, cut to new scenes, define character through dialogue and create conflict.

If you’ve seen the show, then this book enriches your experience. You can hear the actors speaking the lines. And while a show is nothing without the writer, credit must be given to all the cast who bring their characters to life, endowing the words with depth and emotion.

Fellowes’s footnotes are very interesting from a social science and historical aspect, as well as being highly entertaining, enlightening and often humorous.

This Season One book contains scripts for Episodes 1 to 7 plus eight colour pages of stills, a cast list, and production credits.

I’m currently watching Season Two and then reading the second book in tandem.

Posted by Nik Morton at Wednesday, October 21, 2020 No comments: 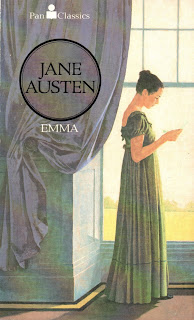 Jane Austen’s longest novel was completed in 1815 and thanks to the self-willed and very self-satisfied character of Emma Woodhouse, it is a firm favourite.

Austen’s characters are indeed fascinating, whether that’s the loquacious Miss Bates (‘I am rather a talker’ [p274]), the insufferable Augusta Elton, Emma’s hypochondriac father, the secretive rich Frank Churchill, the poorly done-by Jane Fairfax and the long-suffering Mr Knightley.

Emma began match-making, finding a suitable husband for her governess Miss Taylor, and felt so satisfied with this happy outcome she determined to seek a suitor for her new friend, docile pliable Harriet. However, it all goes embarrassingly wrong, with confusion piling upon misunderstanding.

Austen’s wit and humour shines through, even after all these years. Her phrase: ‘She could fancy such a man’ (p253) could have sprung from countless modern novels, even.

On beginning Emma, she declared: ‘I am going to take a heroine whom no one but myself will much like.’  At the outset it appears Emma is conceited, self-opinionated, even snobbish and quite bossy; however, she is also beautiful, intelligent, quite lively, strong-willed (‘Emma denied none of it aloud, and agreed to none of it in private’ [p279]), dutiful to her father. And she hides most of the time her sensitivity. A complex character.

My edition (1969) has an introduction and notes by Arthur Calder-Marshall.

From a modern standpoint, stylistically, there’s an over-emphasis of exclamation marks and em-dashes, but this may be typical of the period.

Many paragraphs are far too long.

I’d hope that later editions of mine have corrected the typo on p355 – ‘… and return it into the purple and gold ridicule by her side…’ when ‘ridicule’ should have been ‘reticule’. 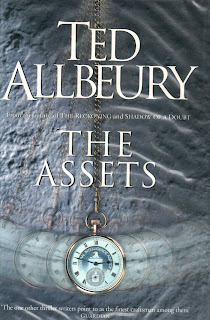 Ted Allbeury is an excellent writer of espionage thrillers, and had written over forty books. This is his take on Operation MK Ultra, which was a CIA mind-control programme. It actually existed, and employed drugs and hypnotism to illegally control unwitting subjects.(A clever cover, showing the timepiece inducing hypnosis).

The story begins in Korea in 1953 with PFC Joe Maguire in charge of released US prisoners-of-war. (The Captain says ‘Good soldiers don’t get taken prisoner’. Remind you of someone?)

By the time of the US departure from Vietnam in 1975, Maguire is a Lieutenant-colonel. Maguire left the army and took up law, mostly acting for ex-servicemen. He’s then recruited by a Colonel Swenson to liaise between the CIA, the Treasury and the Pentagon. Maguire is a fundamentally decent man, an ideal choice to monitor the goings-on of MK Ultra.

The trouble with the mind control programme is that its subjects can become confused and irrational, particularly when their controllers abscond or die in an RTA. The story is set mainly in the US.

Alas, the novel reads like a documentary in parts, and covers a lot of ground, but, with the exception of Maguire, we don’t get to know the many characters in any kind of depth. If this was written by an American author it would be twice the length (it’s 308 pages) to pad details about everyone involved. This was Allbeury’s last book, dedicated to ‘my brave and beautiful wife Grazyna Maria who died a few weeks after I finished the book’. Allbeury died in 2005, aged 88. 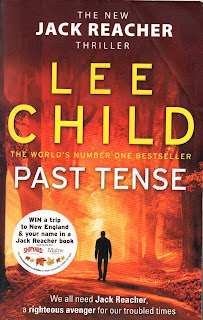 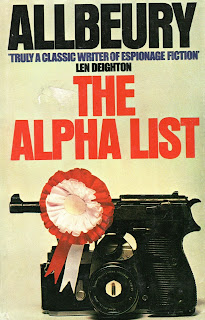 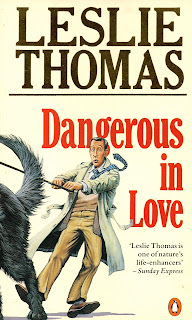 Published in 1987, this is Thomas’s second Dangerous Davies novel.  It’s a long time since I read the first, The Last Detective. This one is a joy to read; it’s droll, with slapstick, social commentary, and just plenty of laughs.

Bound to upset those who are easily offended as it's decidedly non-PC.

Davies is curious about the drowning in the local canal of a familiar homeless person, Lofty Brock. He can’t have been drunk, he was teetotal. Was he pushed? Helping him investigate is Jemma Duval, a beautiful black hymn-singing social worker and Davies’s pal, the workshy philosopher Mod. It’s virtually love at first sight when Davies meets Jemma, who has a missing tooth in the centre of her mouth. ‘Until he had seen that missing tooth he had never realized that something could be so potent, even beautiful, by its absence.’ (p24).

There are two more Dangerous Davies novels in the series.

THE EYES OF DARKNESS - Book review

THE EYES OF DARKNESS 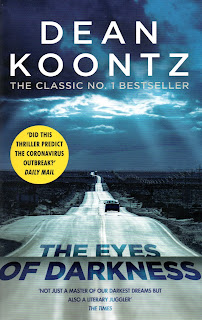 Latest version sports the label ‘Did this thriller predict the Coronavirus out break?’ The book has a bit of history, first being published in 1981 under the pseudonym Leigh Nichols, then revised by Koontz under his real name in 1996. This edition published 2016, though it must have gone for a cover reprint to obtain that coronavirus label.

Divorced Tina Evans is barely over the death of her son Danny a year ago in a tragic accident when she starts to be plagued by nightmares and strange poltergeist happenings in her son’s room that tell her ‘Not Dead’… Spanning the holiday season, from December 30 to January 2, she is determined to get to the bottom of her haunting. She suspects her ex-husband Michael, but gradually she realises that the constant barrage of messages, all accompanied by a severe drop in the ambient temperature, may only be exorcised by drastic measures. She turns to a lawyer friend who supports her belief that only by exhuming her son’s body will the haunting go away. That, however, leads to something more sinister than she could ever have imagined.

Koontz is a master of suspense and the suspension of disbelief, and this early novel is no exception. It’s a page-turner.

As for he coronavirus, there is a reference to a deadly Wuhan virus; whether that was inserted in the original in 1981, or the revised 1996 version, of even the 2016 print, it is just a little spooky!