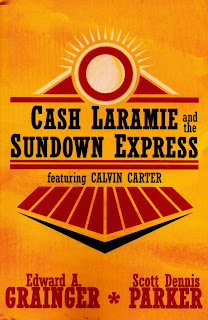 This is a first: a Cash Laramie novel written by a collaboration of two authors – in this case, Edward A Grainger (the character’s originator) and Scott D Parker. Previous novels in the series have been penned separately by Grainger or another author. One reason for this combination is that the adventure also features Calvin Carter, ex-actor and detective, created by Parker.

It begins with a mystery: a train is approaching the rail station from the wrong direction. There’s a special delivery thrown onto the platform – a dead body with a message attached. The new train, the Sundown Express, the fastest in the West, has been hijacked by a group of desperadoes. And they want a ransom paid by sunset or they’ll start killing passengers every hour!

To compound matters, the senator’s daughter is one of the passengers, as well as the famous Lillie Langtry. Railroad detective Carter is on board also, but he’s clearly out-gunned.

Chief Penn sends Marshals Laramie and Miles on Mission Impossible – board the speeding train and take down the criminals without any innocent lives being lost. They’re helped by an army colonel and an eccentric professor and a revolutionary invention. Welcome to steampunk Wild West!

The scene is set for a fast-paced no-holds barred adventure, pitting the guile, wits and bravery of our three heroes against the considerable fire-power of at least ten cold-hearted gunmen. And all the while the deadline approaches.

There are some cunning twists in the story and a fair number of darkly humorous one-liners, too. The authors manage to visualise all the main players succinctly, conveying realistic interaction between them, while keeping the narrative heading on track towards the explosive denouement.

A fast, satisfying read. It’s a while since we’ve seen Cash Laramie; it’s Great to be able to welcome him back.

Posted by Nik Morton at Wednesday, November 10, 2021 No comments: