Way back in 1962, I happened upon Edgar Rice Burroughs’ novel Warlord of Mars. I’d already devoured several Tarzan novels, published by Four-Square at 2/6d. I read this, the third in the original Martian trilogy and was hooked. Then I bought the first in the series, A Princess of Mars and like many boys of my age, fell in love with Dejah Thoris. I still have this book in my collection: 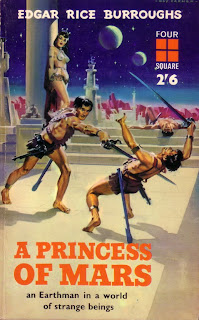 At the time I used to draw bookmarks for my favourite books. Here’s the bookmark for A Princess of Mars, drawn in 1962.

The story of John Carter’s first visit to Mars was serialised in the February to July 1912 issues of All-Story Magazine, then entitled Under the Moons of Mars, as written by Norman Bean. Bean was the early penname of Burroughs, though he’d used Normal, rather than Norman, but it got screwed somehow. The full novel was first published in book form in 1917, after Burroughs’ phenomenal success with Tarzan.

Burroughs’ Martian adventures – all eleven of them – inspired the scientists Carl Sagan and Arthur C Clarke and novelists Ray Bradbury, Robert A Heinlein among many others. 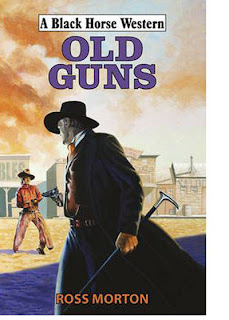 Old Guns can be pre-ordered now from Robert Hale or Amazon or postfree anywhere in the world from thebookdepository. You can also get a glimpse of how the cover was designed by Tony Masero. Check out his website
http://www.artnillustration.com/featurepage1.html

Sam Ransom, 62, learns of the death of Abner, his old partner. Abner left a warning note – the Meak twins were out to get Ransom and the rest ‘because of what happened at Bur Oak Springs’. Ransom sets out to alert his old friends, Jubal, Rory and Derby.
Bur Oak Springs happened over two decades ago. The place was a ghost town even then. Ransom’s family is put in jeopardy and they can only be saved by Ransom and his friends returning to the ghost town, to confront the Meak brothers and their gang. There’s a sense of déjà vu about this; yet, there are fresh revelations too. It’s a showdown: young guns against old guns.
Posted by Nik Morton at Thursday, December 08, 2011 2 comments: