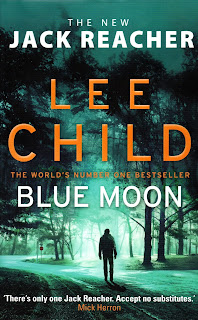 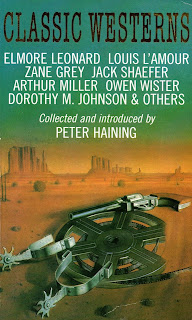 Haining brings together twelve Western short stories, many of which were the templates for movies.

Among these are: Three-ten to Yuma by Elmore Leonard, Stagecoach by Ernest Haycox, Hondo by Louis L’Amour, The Misfits by Arthur Miller, and A Man Called Horse by Dorothy M Johnson.

Other stories feature characters who subsequently appeared in TV or film: The Cisco Kid, Hopalong Cassidy, and The Virginian.

My favourites, besides those film titles above are ‘The Caballero’s Way’ by O. Henry, ‘Dust Storm’ by Max Brand,  ‘The Great Slave’ by Zane Grey, and ‘One Man’s Honour’ by Jack Schaefer.

There’s a good amount of fine prose to be found amongst this selection of mostly moral tales. 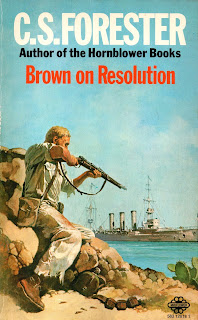 C.S. Forester’s novel was published 1929 and judging from the title you’d be forgiven to think that this concerns a hero on a ship named Resolution. However, the blurb will correct that: Resolution is an uninhabited barren rock in the Galapagos Islands, and it’s 1914, the early days of the First World War.

The entire narrative is from the omniscient point of view. It begins by telling us that Leading Seaman Albert Brown lay dying on Resolution. Not auspicious. Why read on? And yet Forester’s style draws you in; a short two-and-a-half pages for the first chapter. Then Chapter Two takes us ‘more than twenty years earlier’, with a Lieutenant-Commander Saville-Samarez, RN sharing a train carriage with twenty-nine-year-old virginal Agatha Brown, who was leaving her father and siblings for five days sojourn with a family friend in Ealing.

The descriptions throughout are excellent: that morning at breakfast her father, ‘with the newspaper propped up against the marmalade jar he would bring his mouth down to his fork rather than his fork up to his mouth, and he would open the latter alarmingly (which was quite unpleasant when, as was usual, he had not quite swallowed the preceding mouthful) and thrust the fork home and snap down his big moustache upon it… He drank his tea noisily through his moustache…’ (p9)

Thereafter, the pair spent three delirious days in a hotel… and then parted amicably. Agatha gave birth, to the distress of her family, but made the best of it and managed to support herself and her boy Albert, inculcating in him the desire to join the Royal Navy: ‘the sprouting of the grain she was sowing in such seemingly inhospitable soil’(p47). As the years passed, she kept abreast of the latest naval developments, the building programme, and the advancement of a certain officer named Saville-Samarez.

There’s a humorous interlude when Albert’s headmaster courts Agatha, ‘the widow’. Until he reveals his true nature and political beliefs; the man leaves, deciding Mrs Brown is mad.

Sadly, she is assailed with incurable cancer. ‘Agatha’s life went out of her while she floated above a vast grey sea sombrely tinted with  silhouettes of battle squadrons, the grey craggy citadels of England’s glory and hope. Their funnel smoke swirled around her, veiling the worried freckled face of the child of her sin, and she smiled happily.’ (p58).

After his mother’s tragic death, Albert fulfilled her ambition for him and following training joined the newly commissioned third-class cruiser Charybdis.

The war began. The Royal Navy was on the lookout for the German warships Scharnhorst and Gneisenau. One of the German escort ships was the Ziethen commanded by Captain Von Lutz. Charybdis engaged Ziethen but was sunk. However, Brown survived. The engagement had left the Ziethen seriously damaged and its captain determined to seek refuge anchored in the concealing bay that the island Resolution offered.

Aware that the British fleet were scouring the Pacific, Albert Brown set out to prevent the Germans making Ziethen seaworthy. Then it’s a battle of wits and indomitable courage.

A gripping and at times quite moving account of lives well lived – and sacrificed.

And an excellent cover painting.

Word repetition didn’t bother Forester – see the above quotation: ‘quite’. It doesn’t matter.

He was fond of ‘myriad’, used often.

The apparently cold calculating analytical narrative works very well. The omniscient viewpoint was necessary to convey the truth of the story. 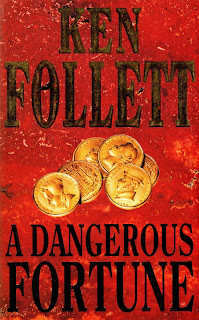 Ken Follett’s family saga, published in 1993, is yet another of his fast-paced satisfying historical novels; the 596 pages simply sped by.

Set in the period 1866 to 1892, the saga revolves around the Pilasters, a banking family. Young Hugh harks from the ‘unfortunate’ side of the family; his father committed suicide on being ruined in a financial collapse not of his making. Yet Hugh is bright and quick to learn, unlike Edward, his cousin, who is incompetent, cowardly and unimaginative. Also affected by the financial disaster is Maisie: her father loses his job, so she and her brother run away to save their parents from worrying about them.

The story begins at private boys’ school when an illicit absence of a small group turns into a drowning. Among those involved are Hugh, Edward and Micky Miranda. To cover up the tragic death and ostensibly protect Edward, Micky lies to Edward’s mother, the powerful attractive Augusta. Over the years Micky inveigles himself into the Pilaster family and once leaving college he is taken into the banking fraternity. Meanwhile, Hugh works his way up from a lowly position in the London bank.

Hugh meets and becomes enraptured by the wilful Maisie, who has grown into an enchanting woman desired by many men in London society. His brief liaison is discovered by Augusta and rather than he be exposed and bring scandal upon the family, she arranges for Hugh to be transferred to the American branch of the bank.

However, as the years pass, Hugh makes a success of his transfer and finally returns to London to acclaim from his seniors. Unfortunately, Micky has meanwhile been plotting to indulge his brigand of a father by arranging dubious loans to his country, Cordova in South America. Exposure of this scheme would ruin the bank and the Miranda family’s chances of a coup against the incumbent dictator. The stakes are raised.

All the characters are well drawn, and either evoke sympathy or anger as they contend with events out of their control. The period is shown in its finery, its sordidness, and the hypocrisy of the times. Some of the sex scenes might distress those of a ‘sensitive disposition’ but I believe they’re true to the period. Above all it’s a story of international finance, the establishment’s complicity in shady dealings, the betrayal of friends, the manipulation of weak men and women, multiple murder, and, above all, love and honour.

There are enough twists and turns in the plot to keep you reading to find out what happens next. I’ve yet to read a bad book by Ken Follett, and this is no exception.

Posted by Nik Morton at Wednesday, January 06, 2021 No comments: