This tome The Untamed West (2018), edited by L.J. Washburn, comprises 29 all new stories in the classic western tradition; it clocks up 564 pages and is a hefty weight, in excess of 150,000 words. The contributors belong to a worldwide group of writers called the Western Fictioneers. 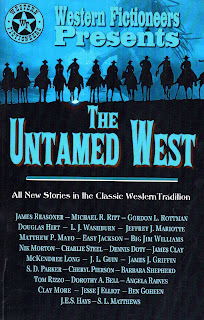 The tales that bookend the volume, ‘Byrd’s Luck’ and ‘Ravens in the Graveyard’ concern simple but honest men who hit face hard situations; the writers Jeffrey J. Mariotte and S.L. Matthews respectively create likeable believable characters with poignancy and depth. The former also has plenty of humour. Indeed, there are a number of humorous tales in the collection: ‘The Pig War’ by Gordon L. Rottman and ‘The Professor Goes West’ by Charlie Steel. I’d certainly like to read more about the professor from the East as he fits into the Old West. L.J. Washburn’s ‘The Battle of Edendale’ relates the days of early cinematography featuring one of her recurring characters, Lucas Hallam. Again, I’d like to read more about this guy!

The fair sex is ably represented with two female sheriffs (‘New Beginnings’ by Jesse J. Elliot and ‘Gunmen can’t Hide’ by S.D. Parker), an oppressed  stagecoach station mistress (‘A Sweet-talking Man’ by Easy Jackson,),  an orphaned woman and her brother under threat (‘The Gamble’ by Cheryl Pierson), a female stagecoach driver (‘Gun-Brand of the Stagecoach Queen’ by James Reasoner, and an abandoned wife (‘The Homestead’ by Angela Raines).

There are a couple of excellent cavalry tales, too: ‘Savage Law’ by Clay More and ‘A Deadly Decision at Adobe Wells’ by Big Jim Williams.

The above gives a flavour. There are others too, all of them evoking certain aspects of the Old West, every one of them worth reading for their emotional and historical content.

Treat yourself to a few hours of exciting, pleasurable reading!