WHERE THE CRAWDADS SING - Book review 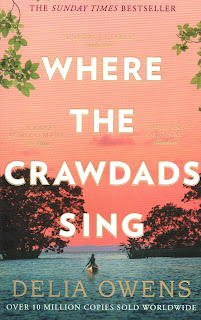 Delia Owens’ debut novel has sold millions of copies worldwide and has thousands of reviews on Amazon, so there would seem little point to my adding to the comments. And yet, that’s what I do – review books I’ve read. My main reason is to remind myself of the story. I’ve been making lists of books read since the 1960s (with a break of a few years – 1967-1981) but I must admit that now I cannot recall the storylines of many titles; I only started writing reviews in the 1982 – when I received books from publishers to review for the British Science Fiction Association and also my own small press sci-fi/fantasy magazine Auguries.

Let’s get the obvious out of the way first. ‘Crawdad’ is slang for crayfish; they don’t sing as such but make a sound termed a ‘pulse train’ similar perhaps to Morse Code (my Google search tells me). But what’s the meaning of the book title? ‘Go as far as you can – way out yonder… far in the bush where critters are wild, still behaving like critters.’ (p111)

Part mystery, part coming-of-age, the book begins with a prologue in 1969 when a body is found in the marsh of the North Carolina coast: ‘the marsh and sea separated the village from the rest of the world, the only connection being the single-lane highway that limped into town on cracked cement and potholes’ (p16). ‘Mostly, the village seemed tired of arguing with the elements, and simply sagged.’ (p17). Then we jump back in time to 1952 for chapter one: ‘The morning burned so August-hot, the marsh’s moist breath hung the oaks and pines with fog.’ (p5) That first line tells you we’ve got something original here. Lyrical, eloquent and steeped in feeling.Yes, there are aspects that require the reader to suspend disbelief; but this is fiction, after all, and if you’re immersed in the story, you benefit.

The young girl Kya has been abandoned by her mother (domestic abuse; don’t tell the ‘trigger-warning dons!) and lives in a marsh shack with her unreliable father and older brother, Jodie. She does not go to school but learns about nature at first-hand. Oh, she tried school for a day, but nobody took kindly to the ‘marsh girl’: ‘Kya sat down fast in her seat at the back of the room, trying to disappear like a bark beetle blending into the furrowed trunk of an oak.’ (p29)

After Jodie left, Kya went out in the boat with her Pa when the man was lucid. Her Pa introduced her to Jumpin’, an old black man who ran the marine gas station on the wharf. We’re not told she is shy; instead, we get: ‘Kya searched her bare toes but found no words.’ (p64)

By 1960 she’d grown some, budding into a beguiling beauty. ‘Loneliness had become a natural appendage to Kya, like an arm. Now it grew roots inside her and pressed against her chest.’ (p100)

Her loneliness is assuaged by two boys who become men, but her interactions with most people are minimal. After her father goes away, she has learned to live alone and cope with a little help from Jumpin’ and his good wife.

Looming over her fascinating life story are the flashes forward to 1969 and the mysterious death that might be a murder. And the locals suspect that Kya is responsible for the death.

It would be unfair to reveal more, save to say that the pages demand to be turned.

The many descriptive passages evoke the place and the person of Kya. The reader can almost feel being there. Besides being a murder mystery, it’s also a love story. Uplifting, poignant, and ultimately surprising. This book deserves its fame.

Here's the 'New Releases' press release from the US publisher ROUGH EDGES PRESS.

A GATHERING OF SPIES - Book review 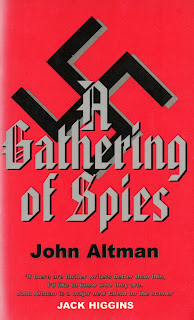 John Altman’s 2000 debut thriller is quite an accomplished first novel, even if flawed.

It begins in New York City in 1933. Catherine, a young woman is walking along the dockside with her friend Katarina. Then Catherine is murdered and her body is consigned to the river. Next we skip to Salisbury, UK in 1942 and one-time pacifist Winterbotham is approached by Taylor, a friend, to join him in some secret work. Winterbotham refuses the offer. Now we jump to New Jersey, 1943 and Richard Carter is moving from Princeton with his wife Catherine to join ‘the greatest thinkers in the world’ at a place called Los Alamos. In England, as the war drones on Winterbotham relents and joins Taylor at a secret destination where he learns about the ‘Double Cross system’ – British Intelligence is using captured German spies to feed misinformation to the Nazis. Winterbotham has his reason: in return for helping Taylor he wants to learn the whereabouts of his wife who has been interned.

At Los Alamos Catherine, in reality the sleeper Katarina, discovers vital documents in her husband’s office, information that she must get to Germany. How she manages this is quite intriguing, landing her in England after an Atlantic voyage. Thereafter there is a good cat-and-mouse chase which keeps the pages turning.

There are some good observations; here’s one: ‘Nitrates from the burning shells had enriched the soil. There were purple crocuses everywhere he looked, and even Sisymbrium irio, the London rocket – more irony – which had t been seen in England since the great fire of 1666.’ (p82)

Katarina proves a deadly and resourceful woman. Perhaps she is portrayed slightly superhuman in her methods and ability to escape from threat. But suspend disbelief and enjoy the action-packed ride. She manages to get a signal off to Germany to arrange to be picked up from the eastern coast of England. This message is intercepted but the actual coordinates are coded. Winterbotham and Taylor attempt to second-guess her. I was surprised and amused to read that one possible pick-up point was Whitley Bay on the north-east coast – my home town! Sadly, there was no real feel for the place – and the well-known lighthouse – St. Mary’s – was not mentioned.

The background, notably the Nazi interludes, is quite well done. We get to see Hitler, Admiral Canaris, and several spymasters on both sides. Even Churchill appears. The ending is satisfying with the possibility of a sequel.

A first novel that showed promise.

We all make mistakes, but sometimes maybe we can blame the editor:

‘train chugging across railroad ties’ (p166) – railway joints rather than ties? The tie used to be made of wood; the rails are metal and the sound made is the wheels crossing the joints between two rails.

Norfolk, UK: ‘She could hear the hum of cicadas…’ (p189) There is only one type of cicada in UK – and they are found in the New Forest, a long way from Norfolk. However, in Norfolk, Virginia you will encounter them (the 17-year variety)!

‘… to make matters worse the sky above them was clouding over…’ (p207) Where else would the sky be? Omit ‘above them’, perhaps?

‘… looked down at the bulkhead beneath his feet.’ (p221) A bulkhead on a ship is the wall; beneath your feet is the deck.