31 days to go for THE $300 MAN.
95 days to go for LAST CHANCE SALOON large print.
Both can be pre-ordered on the book depository site post free anywhere in the world.

Ross Morton is no longer in the top ten of the book depository. Good to see Gillian and Ian up there.

The third Wild West Monday is June 1 so anyone interested, mosey over to The Tainted Archive blog for the full lowdown.
Posted by Nik Morton at Tuesday, April 28, 2009 4 comments: 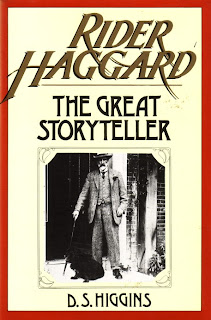 In March I entered this year’s Rider Haggard Short Story competition run by the Rider Haggard Society. The entry fee was £10 which may have put off many contenders.
There were eight entrants and six were on the short list and received consolation prizes.
As it transpired, I was on the short list but didn’t win first prize.
The winning entry, Look for me in the Mountains, by Maureen Osborne will be published in the quarterly Society Journal. (Of no consequence whatsoever, the title reminded me of another title - Watch for me on the Mountain (1978), a book about Geronimo by Indian born Forrest Carter).
The society’s website is http://www.riderhaggardsociety.org.uk/.

Rider Haggard's first book was published when he was 26 and in the period 1882 to 1890 he published sixteen books, among them five books which became the sensation of his age. These were King Solomon’s Mines, She, Allan Quartermain, Jess and Nada the Lily. Within that same period he also wrote Eric Brighteyes, The World’s Desire and Allan’s Wife. In all, between 1882 and 1924 he had 68 books published (10 of them non-fiction).

To many, Rider Haggard is one of the great fathers of the adventure story, mixing daring, courage, exotic locations, esoteric characters, strong females and supernatural themes.

Now that we’re seeing the emergence of a new adventure hero in Gabriel Hunt (Hard Case Crime publishers), maybe it’s high time that Haggard’s body of work is reappraised.
There are certainly plenty of adventure lovers out there – witness the popularity of Indiana Jones and Tomb Raider. Sadly, the online magazine Blazing Adventures bit the dust, which was a pity. It would be wonderful to think that somebody with financial clout and a love of adventure stories could bring out a magazine featuring just that – imaginative adventure with heroes and heroines doing what they do best, fighting and overcoming evil in all its guises.
Posted by Nik Morton at Friday, April 24, 2009 3 comments:

This certainly came as a bit of a surprise when I read it on http://blackhorseexpress.blogspot.com/

As the blog says, 'The chart-tastic news this week is that Ross Morton's latest The $300 Man has blasted its way in from nowhere to number 2 while The Tarnished Star is this week's oater-pickers favorite.'
1. The Tarnished Star - Jack Martin
2. The $300 Man - Ross Morton
3. Nightmare Pass - Lance Howard
4. Last Chance Saloon - Ross Morton
5. All Guns Blazing - Douglas Thorne
6. Draw Down the Lightning - Ben Bridges
7. Death at Bethesda Falls - Ross Morton
8. Return to Black Rock - Scott Connor
9. Silver Galore - John Dyson
10. Meredith's Gold - Philip Harbottle
All books available at http://www.bookdepository.co.uk/ where worldwide postage is free.
So that's all 3 of my books in this particular top 10. The $300 Man is not out till the end of May so that's on pre-orders alone - as is Jack Martin's The Tarnished Star... Colours seem to be popular in the titles too - black, gold, silver.
Nik
Posted by Nik Morton at Wednesday, April 22, 2009 3 comments:

Express Westerns has begun the countdown to the next Old West anthology of short stories.

Deadline date for finished stories - Sunday 26 July. For no other reason than on that date in 1878 Wyatt Earp had a gunfight in Dodge City!

Publisher Ian Parnham has featured an interview with me at
http://ijparnham.blogspot.com/2009/04/interview-with-nik-morton.html
Posted by Nik Morton at Saturday, April 11, 2009 2 comments: 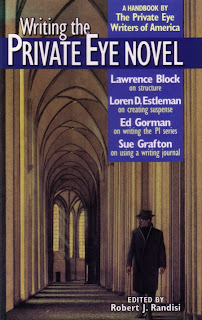 For a number of years I’ve wanted to write a private eye novel so I bought this book when it was new – 1997. There hasn’t been a new edition since, but really there’s little call for one. Virtually everything said in these pages still holds true. This won’t tell you how to write a mystery and few specifics are covered, but its advice will certainly prove useful and probably save a lot of time for anyone embarking on a PI novel. And, if you want to go down those mean streets, the recommendation is go for a series character. To do that, start building his or her backstory before you write the first book; that includes friends, relations and the neighbourhood. Sound advice for any novel, actually, but for a series character it’s almost essential.

Founder of the Private Eye Writers of America and creator of the Shamus Award, Robert J Randisi has gathered together a number of accomplished authors to offer their nuggets of writerly wisdom.

Lawrence Block advocates gripping the reader at the outset, never letting go till the end. He quotes Mickey Spillane, who said, ‘The first chapter sells the book; the last chapter sells the next book.’ We all know that beginnings are important; but don’t neglect the end – don’t rush it, don’t over-explain and don’t leave the reader disappointed. Intriguingly, Block says that his literary apprenticeship began with writing soft-core sex novels, which taught him to avoid sections of novel that were liable to lose the reader’s attention: keep the action going.

Loren D Estleman spells it out. ‘Suspension of disbelief is a high-wire act, requiring enough plausibility on one end of the balance pole to counter the pull of audacious invention on the other.’ He advises beginners to beware of proven authors who might ‘break the rules’; they can afford to, they have a fan base, followers. Beginners should stick with what works. For example, avoid soliloquies and clunking lengthy expositions at the end. He concludes that your book should ‘keep the reader tied up until the last knot is unravelled, then make them want to be tied up all over again.’

Ed Gorman advocates that writers should read – anything and everything. But especially as much as possible in your chosen genre. Choose four or five favourite books and analyse their chapters, characters, motivation etc and before long the mysteries won’t be that mysterious. That’s what many writing guides do, actually, they relieve prospective authors from wading through entire volumes doing their own research: the offer up the nuggets in digestible form. But even so, writers have to apply themselves rigorously and simply write and write and write.

Female private eyes are discussed, and writing a first person narrative from the perspective of the opposite sex. The setting of a PI novel can become a character in the series in its own right; so you need to know as much as possible about the chosen environment where the action takes place.

Max Allan Collins contributes twice – which isn’t surprising since he’s been nominated and won the Shamus Award more than once. His first foray discusses historical PI fiction, citing his award winning Nathan Heller novels which cover the early decades of last century. Needless to say, this kind of approach entails considerable research. Mr Collins’s second item is about writing private eye comic books. The market isn’t so great, but if you have a visual as well as a dramatic sense, then this may be worth investigating. You could check out Mr Collins’s Ms Tree graphic novels.

Writing the PI short story is covered too. This is quite difficult as the PI tale invariably relies on character and atmosphere, both of which eat up precious words. The writer of this section, Christine Matthews, quotes Stephen Vincent Benet: ‘A sort story is something that can be read in an hour and remembered for a lifetime.’ She also mentions the latest trend (1997) is Church lady mysteries. (It was about that time when I first thought up my Sister Rose character (Pain Wears No Mask), so that’s intriguing!

John Lutz emphasises the four main elements of fiction – character, setting, situation and theme. Whatever the fiction. Though in most good PI fiction, character dominates.

And of course there are crossover possibilities, mixing and matching more than one genre with your PI tale. They can work, and have the advantage of perhaps appealing to two distinct sets of genre readers.

An encouraging book if you’re inclined to write a private eye story. One of many useful books from Writer’s Digest Books. Check out their Howdunit Series for details about everything from poisons to weapons.
Posted by Nik Morton at Thursday, April 02, 2009 4 comments:

They say every cloud has a silver lining and it seems that this is true even where the credit crunch is concerned. The Costas of Southern Spain are likely to benefit, at least, according to a scientific study published today.

Avril Loof, 37, of the Tectonic and Seismic Institute, Valencia, says that the recent collapse of several building consortiums in Spain means that her team’s calculations will have to be revised.

‘We first encountered the Tipping Point issue about five years ago. If the trend of building had continued at its 2003 pace, we predicted that the massive weight of concrete would have a catastrophic effect on coastal Southern Spain.’

The northern plates of the Iberian peninusla are pushing against the Pyrenees, raising the earth about 1mm every year. ‘But,’ says Loof, ‘in 2003 we noted that the rise was accelerating and measuring just over +2mm.’

None of their computer models could account for this phenomenon, as there was no increase in seismic activity. In fact, quite the reverse. The frequency and strength of the earth tremors in Spain and Portugal had lessened every year.

‘There was one inescapable conclusion,’ she says. ‘The massive weight of concrete being poured on the land along the coast was tipping the southern part of Spain into the Mediterranean. Our studies over five years had pointed to publishing a cautious alert this year, with particular emphasis on the La Manga area. However, in the last eight months, as building work has drastically reduced, we have recorded a settling for the first time.’

Apparently, settling is where the tectonic plate readjusts and stays more or less static. It remains to be seen whether the peninsula plate will seesaw again when the building industry recovers from the current financial difficulties.

‘In the meantime,’ Miss Loof says, ‘this hiatus offered by the settling has given us time to conduct further important tests. The problem has not gone away. Perhaps lighter concrete may be the answer.’
Posted by Nik Morton at Wednesday, April 01, 2009 2 comments: