Book of the film: Vertigo 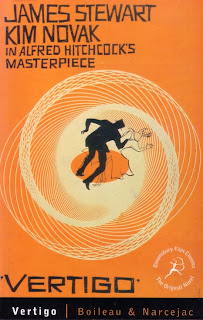 The book Vertigo was originally written by Pierre Boileau and Thomas Narcejac in French, D’Entre Les Mortes (1954) and translated by Geoffrey Sainsbury as The Living and the Dead in 1956. I don’t believe the book’s beginning would attract a publisher nowadays; as it contains far too much exposition via lengthy dialogue. Still, the story itself is intriguing – hence the adaptation for Hitchcock’s 1958 film. Perhaps not surprisingly, the film diverges considerably from the book, save for the crucial deception.

The book's protagonist Flavières left the police due to his inability to cope with vertigo (or possibly acrophobia), and seemed at a loose end so he was grateful when his old friend Paul Gévigne asked for his help. However, Flavières wasn’t too happy when he found out he was hired to follow Paul’s wife, Madeleine. She was a mystery, it seemed. She had altered psychologically since they married and was obsessed with her strange past. Worse, Flavières found himself being obsessed by the beautiful Madeleine.

Unlike Kim Novak’s curvy blonde character of the movie, the book’s Madeleine was dark and slim. Of course we know that Hitchcock seemed to have his own obsession with blonde actresses. Madeleine wore a grey suit – as did Novak. And only her name was retained for the film; Flavières became Scotty Ferguson (James Stewart) and Paul became Gavin Elster.

The story begins during the phoney war, before the Germans had invaded France. As it was written some nine years after the war, there’s no obvious reason why it wasn’t set in the 1950s, save that perhaps there’s a parallel between the fall from grace of Flavières and the collapse of his country. It’s obviously a French story, as Flavières ponders about Paul’s concern for his wife: after all, Madeleine ‘had every right to have a lover if she wanted to.’ Yes, typically French, that. Though even at this early stage (p22), Flavières found that he hoped she didn’t have a lover, as he felt he’d suffer acutely at the knowledge.

I don’t believe the film realistically showed the growing obsession James Stewart had for Kim Novak. The book conveys this gradually, subtly: ‘… he was mortified by the joy he felt at the prospect’ of following Madeleine. By p32 ‘he had only to think of her to lose his sense of proportion.’

Following the tragic events of Madeleine’s suicide, the German offensive of France began in earnest. Flavières went to pieces and ‘made little distinction now between the national disaster and his own. France was Madeleine lying crushed and bleeding at the foot of a church tower.’

At the beginning of Part Two, Flavières returns to post-war Paris, and his past seems to haunt him still. The similarities between the book and the film are there, though the Paul character died during the war. It would be unfair to detail much else, save to observe that since this is a French novel, it most definitely has noir undertones with an unhappy ending, in effect to gratify Flavières’ ‘taste for melancholy, solitude, and impotence.’
Posted by Nik Morton at Sunday, February 28, 2010 3 comments:

I don’t think I can maintain this pace, but it’s a great feeling.

I’ve got a couple of manuscripts out with publishers, but don’t hold out much hope of getting a hat trick in March…!

Still awaiting the publication of the fantasy quest novel Wings of the Overlord, sometime soon from Libros, I hope...
Posted by Nik Morton at Wednesday, February 24, 2010 5 comments: