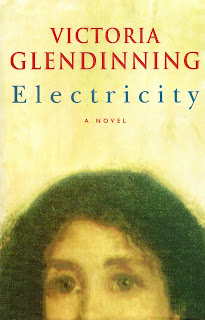 Victoria Glendinning’s second novel Electricity was published in 1995. It is an excellent piece of writing narrated in the first person beginning in the period 1883.

Charlotte is reflecting on what has happened to her in the last couple of years with wit, candour and growing self-realisation. The narration is so credible the reader feels a privileged confidante.

A twenty-one-year-old stranger, Peter Fisher, was due to stay at their London suburb family home by arrangement with a relative for a modest rental. The acquisition of a lodger was timely since the father of the house had lost his job. Charlotte was eighteen. An attachment developed in the close confines. It transpired that Peter was a young genius fascinated with electricity, working with a Mr Ferranti, ‘the coming man’.

Soon after Charlotte’s Aunt Susannah came to stay at their house too. And Charlotte had to share her bedroom…

All of the characters are well-drawn, whether it’s the positively creepy father, the put-upon mother, the querulous Aunt, or the electricity-obsessed Peter. Of all these, Aunt Susannah is the most amusing and memorable.

Glendinning’s descriptions of the period, down to the finest detail of the way they lived, put the reader deep into the story. There’s plenty of humour and indeed poignancy, sadness and tragedy. Many subjects spark interest, such as animal magnetism, Mesmerism, electricity itself, dress-making, precious and semi-precious stones, English apples, séances, electroconvulsive therapy, infidelity and duplicity, all expertly woven into Charlotte’s tale.

This is a believable slice of life in the 1880s, and very well told. 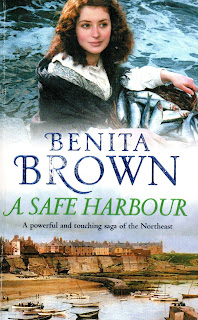 Benita Brown (1937-2014) published almost two dozen novels. A Safe Harbour was her thirteenth novel, a saga set in the Northeast of England.

This well-written saga is set mainly in Cullercoats, in 1895. Eighteen-year-old Kate Lawson has striking Titian hair and is known to be bright and a worthy catch for any local man, but she has chosen Jos, a fisherman. Unfortunately, shortly before their wedding, Jos dies at sea due to a foolish accident. When her drunken father discovers she is pregnant, she is banished from the family home. Kate has to rely on the kindness of her aunt.

Richard Adamson, the handsome owner of a fleet of steam trawlers, is not popular among the fishermen as his new boats are more efficient and claim bigger catches. Despite her family’s enmity towards Adamson, she falls in love with him. Yet she cannot reveal her shame to him or anyone else in the community. The best she can hope for is to move abroad, heartbroken, to be confined with a relative in North America…

Brown was a north-easterner and it shows in her characterisation and depiction of the area and period. Many of the places named are familiar to me, not least Cullercoats, Tynemouth, Whitley, Jesmond, Newcastle, and Monkseaton. There is a smidgen of Geordie jargon, but nothing that is too incomprehensible. A family doctor figures, too, by the name of Phillips; which reminded me of our Whitley Bay family physicians, Doctors Phillips and Vardy, both of whom sported bow-ties!

Adamson is made from the broadcloth of Victorian heroes, and Kate is his equal in her strength of character.

Posted by Nik Morton at Saturday, February 20, 2021 No comments: 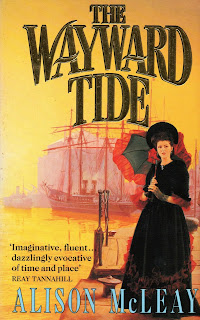 This was Alison McLeay’s debut novel, published in 1990. An extensive biography of her can be found in her entry in Fantastic Fiction: https://www.fantasticfiction.com/m/alison-mcleay/, a resource which I recommend. There followed six more books before her demise at the relatively young age of 39 (1949-1988).

McLeay was meticulous about researching her books, whether fiction or non-fiction, and it shows in The Wayward Tide. It’s rather sad that this book has only one review on Amazon. Of course the author died before Amazon took off. In fact the book became an instant best-seller, and was labelled ‘the most stunning fiction debut in years’ by Publishers' Weekly in America, where the first print run reached an astonishing 100,000 copies. The American version was titled Passage Home. The Wayward Tide was published in ten different languages.

McLeay travelled to many parts of the world to carry out research for her books. ‘If you are going to have the feel of the place, you have to go there,’ she once said.

It’s good to have a break from crime and thrillers and sagas such as this certainly immerse you in their author’s world.

The Wayward Tide is a first person narrative by Rachel Dean, beginning with her childhood in Newfoundland in 1827. Her parents are not particularly loving towards her; she tends to escape into the world of nature – until a shipwreck brings Adam Gaunt to their community, where he resides in the Dean household. There’s a big age difference; so Rachel merely has a crush on him. When her mother learns that Adam once had a native Indian wife, her attitude alters markedly and soon Adam Gaunt has left the family home. Rachel’s coming-of-age is amusingly and touchingly revealed, including her infatuation with another lodger, Francis Ellis, who proves duplicitous. Both Gaunt and Ellis keep popping up in her life in the future.

It would be a shame to reveal more, save that Rachel is made of stern stuff and faces hardship in the American wilderness as a young wife, as a saloon singer, and as a mother. Her eventual move to Liverpool, her family’s ancestral home, brings fresh changes and a new husband.

McLeay captures the period, the lifestyle of frontiersmen, the squalor of Independence (Rachel’s wilderness home), the deprivation of the bustling Liverpool, and the burgeoning shipping business of the time.

The cover artwork is excellent; the back cover illustration reminds me of a still photograph of James Stewart, probably from the film How the West Was Won. 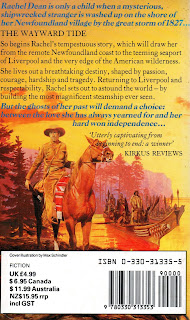