Old Before My Time 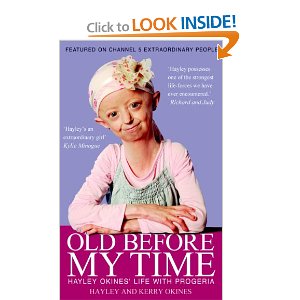 Hayley is fourteen, but she has the body of someone aged about 100. She's one incredibly brave teenager. Not one in a million, but one in eight million - that's how rare her diease Hutchinson-Gilford Progeria is. I've known about her through the press for several years. Now she has a book out from one of my UK publishers, Accent Press, entitled Old Before My Time. The doctors predicted she'd be dead by age thirteen. She's currently being given special treatment by doctors in Boston and 'feels fine'. She was on TV the other day and it was humbling to see someone who has been issued an early death warrant by fate smiling and being so positive. Despite the pain her old bones give her...