Beat to a Pulp - Don't Drink and Drive

This week’s Beat to a Pulp webzine features my story, ‘Don’t Drink and Drive’.

Excerpt
His car's all-seeing eye on the roof spotted them: only a speck on his view-screen. Its shadow spitting blackly across the dull straight road, the motorway patrol helicopter encroached.

He'd heard of the searching equipment they employed to deter drunken drivers. A kind of sniffer capable of detecting alcohol on a person's breath at five hundred meters in ideal conditions.

He slowed. Maybe they're only patrolling? Act normally, stick to the 110 kph limit.

The bulbous glass egg swerved, angled down, rotors chomping air, its haunting blue-flashing siren peeling across the empty night. The alco-probe had scented him! Four minutes to go before the gum would work—he hoped. He depressed the acceleration button, veered into the fast lane, but neglected to look behind.

And while you’re there, please check out the archive stories. You’ll find a broad collection of good stories – science fiction, horror, crime noir, western, many with twists in their tails.

Also, the editors of Beat to a Pulp webzine have published a print anthology, appropriately titled Beat to a Pulp Round One, featuring 27 gripping quality tales in 380 pages. You can buy it by clicking on the link on the left, or from Amazon and elsewhere.
Posted by Nik Morton at Monday, November 29, 2010 No comments: 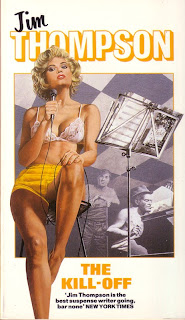 Ironic that not one of Thompson’s 29 novels was in print in his country (USA) when he died in 1977, at the age of 71. His reputation has since been restored, following on from several of his books being filmed, notably The Getaway and The Killer Inside Me.

Over the years, Luana Devore has used her acid tongue to spread gossip, innuendo and falsehoods about many individuals. She’s living on borrowed time – but who will commit the act and rid the world of the vile woman? The voices are individual and power the story forward to its stark conclusion.

This book is a bravura effort: twelve chapters, each in the first person by a different character from a backwater New England town, Manduwoc. There’s Kossmeyer, the lawyer; Ralph Devore, downtrodden husband of Luana, seeks solace with Danny Lee, the singer; Rags McGuire, the washed up jazz musician employing Danny; Bobbie, wayward son of Doc James Ashton; Hattie, the Negro maid and lover of the doctor and mother of Bobbie; Goofy Gannder, the drunk and incompetent; Henry Clay Williams, county attorney up for re-election; Myra Pavlov, inadequate lover of Bobbie; Pete Pavlov, builder and father of Myra and duped out of thousands by the Devores.

BEAT TO A PULP - Round One 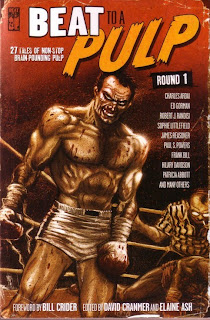 Just received my copy of Beat to a Pulp - Round 1 anthology and it's a handsome beast, weighing in at 380 pages with an intimidating cover. Editors David Cranmer and Elaine Ash have assembled a scintillating selection of writers, among them Charles Ardai (founder of Hard Case Crime), award-winners Hilary Davidson, Sophie Litlefield and the mysterious Anonymous-9, Ed Gorman,mutliple western authors Chap O'Keefe and Ian Parnham, and the legendary Robert J Randisi and James Reasoner. Novelist, prolific auhtor and blogger and columnist for Ellery Queen Mystery Magazine, Bill Crider supplies a foreword and comments: '...Nik Morton's "Spend It Now, Pay Later", a chilling near-future tale that makes the "arm and a leg" intrest rate all too real.'

Order this through Amazon or other online bookstores or from your friendly bookshop. 27 tales about drifters, killers, cutlass-swinging pirates, slaughterous simians - pulp fiction with punch.
Posted by Nik Morton at Thursday, November 11, 2010 6 comments: