This is the annual Sherlock Holmes special, which appears every October. 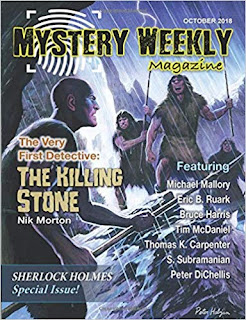 We begin with Michael Mallory’s tale ‘The Inimitable Affair’ which cleverly has Holmes and Watson dealing with blackmail, an ex-actress called Ellen Ternan and a certain Charles Dickens. Enjoyable, indeed.

Next is ‘The Very First Detective: The Killing Stone’ by Nik Morton, which is a pastiche concerning one prehistoric Olmes and his narrator, Otsun, based on ‘a series of controversial prehistoric paintings on stone tablets recently discovered in a secret cave complex in the Pyrenees’. A great appropriate cover by Peter Habjan.

A non-fiction piece by Bruce Harris interestingly analyses an incident in A Study in Scarlet.

A non-Holmes tale is ‘The Secrets of Skin’ by Thomas K Carpenter, set in ancient Rome, where the obese magistrate Ovid is placed in the unenviable position involving politics and theft. Some excellent humour in this story!

Tim McDaniel’s ‘A Death in Tadcaster’ is homage to Agatha Christie’s Miss Marple, concerning one Miss Dalyrimple, with a neat twist.

The prolific Holmsian S Subramnian’s contribution, ‘The Beginning of the Final Problem’ is just that, a precursor to the Holmes story ‘The Final Problem’, and it’s well done.

Lastly, Peter DiChellis provides a ‘you solve it’ short piece, ‘Treasure Cave’ – you’ll get the solution next issue, however.

Available on Amazon.
Posted by Nik Morton at Tuesday, April 30, 2019 No comments:

I was greatly saddened to learn that Charlie died last week from pancreatic cancer. We'd been distant writing friends for about a decade - distant in the sense that he lived in Japan and I live in Spain. He was a prolific writer of fiction and non-fiction and with wide interests and he touched many lives. We co-edited a western anthology, A Fistful of Legends (2009). He wrote his excellent westerns under the pen-name Chuck Tyrell; his Japansese historical adventure stories with the overarching title The Masacado Scrolls are written as Charles T. Whipple. 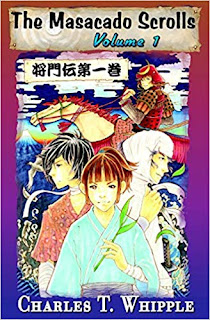 A good and sincere friend with a sense of humour.

Those who knew Charlie are diminished by his passing.

Condolences to his family.

Megan Abbott’s third novel, Queenpin (2007) surpasses her excellent previous books, The Song Is You (2005) and Die A Little (2007). She has since published another six crime novels. 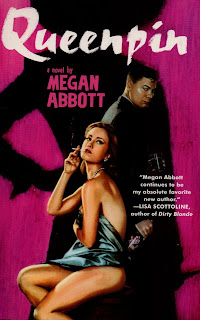 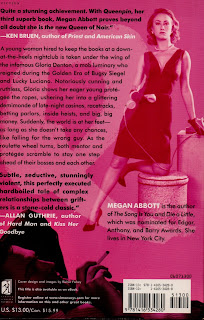 The Queenpin of the title is a mob moll called Gloria Denton, who’s ice-cold, calculating and exceedingly good at her business, having been at the top of her game for a couple of decades, reliably transporting stolen diamonds, race-track winnings, fixing the odds, all for the bosses.

Maybe because age or the business is catching up with her, Gloria takes the narrator, an unnamed young woman under her wing, rescuing her from hum-drum book-keeping in a lowly nightclub and trains her as a go-between.

As we’ve come to expect by now, Abbott gets under the skin of the narrator with ease. This is all so believable, almost like a confessional, with plenty of wisecracks and slick one-liners and period description.

Slowly, Gloria’s tuition pays off and our narrator looks, sounds and acts like a younger version of the Queenpin. But then things start to slide into noir territory as the protégé falls heavily for a loser, a guy who is never going to win the big score, no matter how often he tells himself he will. From there, the tension mounts.

Then there’s a shocking murder, a disinterment, and more than one betrayal along the way, told with grim precision and word-economy.

Alistair MacLean’s River of Death (1981) is not vintage MacLean, written the year before the dreadful Partisans, and yet it inspired a movie of the same name! 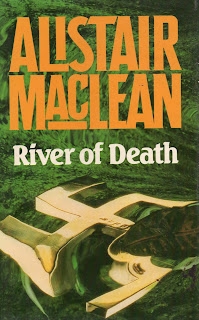 The hardback blurb says: ‘It takes Spaatz more than 30 years to track down his old SS comrade in South America to exact revenge for his betrayal and the theft of a hoard of gold they had amassed together in the last months of the war. But as Spaatz’s small strike-force makes its perilous way through the final stages of the deadly pursuit, Spaatz has failed to consider there may be others in his party with quite different motives but no less determined to bring their quarry to justice.’

The reissued paperback blurb says: … the classic tale of adventure and the dark secrets of a lost city in the Brazilian jungle, from the acclaimed master of action and suspense. The Lost City: Hamilton knows the way to the ruins deep in the Brazilian jungle - and the secret they hold. The millionaire who calls himself Smith seeks the lost city to avenge a wrong from his hidden past. Their journey down the River of Death is an epic of violence and danger. But the secret that awaits them in the lost city is more dangerous still - as a legacy of theft, treachery and murder stretching back to war-torn Europe comes to a deadly climax beneath the ancient walls.’

We can’t blame the author for the poor blurbs. The identity of Spaatz isn’t revealed until we’re near the end of the book; and there’s no so-called ‘strike-force’. And really there is no dark secret – it seems to be known by most of the group with Hamilton, once their identities are revealed. As for the deadly climax – it mostly occurred off-stage, the hero uninvolved.

So, to the book itself. The Prologue starts during the war, and the event described in the blurb, with Spaatz being double-crossed, and is in the classic MacLean WWII style. Then, again, in the opening chapter we’re in traditional MacLean territory with mysterious characters following other mysterious characters. The main character is in fact Hamilton, an overconfident too-clever-by-half hero-by-numbers that MacLean has used often, but this time with much less depth.

After a lot of padding, to-ing and fro-ing, Hamilton is hired by the press magnate to take Mr Smith and his party to the Lost City of the Mato Grosso that Hamilton has recently discovered. Needless to say, there are ulterior motives harboured by several members of the party.

There is too much dialogue and not enough action for an adventure novel or a thriller.

There are exciting portions in the book, mostly towards the end, on the river, the so-called Rio da Morte, where native tribesmen are encountered and pose a threat. But the conflict never really creates the necessary tension. And we’re never really there with Hamilton et al.

As this is a MacLean novel few people are what they seem!

The book had its moments, I suppose, but overall this was disappointing. A quick relatively light read.

These comments are criticising the publisher and editor as much as the author. Apparently, MacLean wrote many of his novels in about 35 days and never re-read them once he’d finished them. It is also believed that his later novels (maybe this one included) were ghost-written based on his ideas.

Names. Nearly all writers do it. Get fixated on character names beginning with the same letter. Ancient advice is to avoid this. Maclean didn’t here. We have Hamilton, Hiller, Dr Hannibal Houston, and Heffner.

Consistency. On p27 Hiller trains a rifle on a character called Serrano (and no, he isn’t a ham actor but an antiquities expert). Then while still in the same scene, on p30 Hiller pockets his own gun. (Must have deep pockets).

Repetition. Hiller seems intent on sucking Hamilton into his scheme, and alludes to hooking him, and then gaff and land him (p37) Then a short while later, Hiller had been sure ‘he had his fish hooked: now he had it gaffed and landed.’ (p53)

I was drawn to the book Jet by Russell Blake because the cover shares the same model as my book Mission: Prague (see the two covers to compare below). 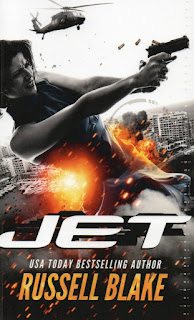 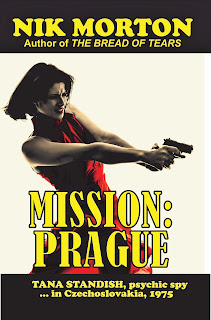 The similarities don’t end there, either. Maya, codename Jet is a twenty-eight-year-old Mossad assassin. The heroine in Mission: Prague is psychic spy Tana, a survivor of the Warsaw ghetto; she was thirty-eight at the time of her Prague mission.

Tana’s Prague novel first came out in 2008 as The Prague Manuscript. Jet was published in 2012, though the ‘shared’ model did not appear on the new Prague cover until 2017.

Both books are fast-paced.

Jet – the first book in the series
Maya thought she’d left behind her life of violence and had retired to Trinidad. Unfortunately, somebody from her past had talked and sent an assassination squad to eliminate her. From the explosive beginning to the traumatising end, it’s action all the way. I certainly want to read more in the series!

Russell Blake has produced a page-turning thrill-ride that has built up an enviable fan base. And to his fans’ delight he’s prolific. He’s just produced his SEVENTEENTH Jet novel (including two prequels) plus a host of other series; in all, in seven years he’s written about 60 books (and co-authored two with Clive Cussler).

If you like your adventures fast and furious, try the Jet series.

Mission: Prague was released by a MOD accredited publisher, Manatee Books. It is based on a manuscript that came into the possession of the author Nik Morton (believed to be a pseudonym). Investigations are in hand to ascertain the source. It is believed that the work is a collaborative effort by a select group of agents, all intent on telling the story of Tana Standish, psychic spy.

Standish was recruited into International Enterprises (Interprises) in 1965 and her career continued until 1988.

Her story is ostensibly being told as fiction. Mission: Prague involves Standish in a mission in Czechoslovakia in 1975.

Tana was born on May 12, 1937 in Warsaw. At the time of the uprising of the ghetto in 1942, she was five years old. She had two brothers, Mordechai and Ishmael, both now deceased. She was adopted by a British couple in 1942, but her adoptive father Lieutenant Hugh Standish was killed ironically in a car crash two years later. Her mother Vera never remarried.

Tana joined Edinburgh University in 1955 and read Psychology, gaining a BA (Hons) in 1958. Thereafter, she worked for the Parapsychological Research Unit, Northamptonshire – 1958 to early 1965; during this time, she travelled to the US and the USSR, among other countries, to give talks on memory, for, besides possessing psychic abilities, she has a photographic memory.

Two of her later missions have been documented in Mission: Tehran (1978) and Mission: Khyber (1979)