Brenda McBryde’s novel was published in 1991. 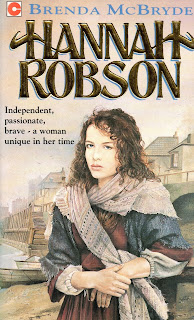 Set in the 1680s in Northumberland, Hannah Robson evokes the period well from the traumatic beginning where twelve-year-old Hannah witnesses the painful and bloody birth of her baby brother, to the satisfying end several years later.

Witnessing that birthing event, Hannah swore she would never marry or have children. She was a hard worker on the family’s bleak hill farm and suffered more than her fair share of lashings from her father’s belt. She is protective of her younger sister Joan who was born with a deformity: ‘It was unfair of God to disable thee when the rest of us are all well-made,’ Hannah says. Apparently, hers was a difficult birth and the father would not spare the fee of a midwife. ‘It is not God I blame,’ says Joan (p71).  Hannah has an older brother, Tom who leaves home to be apprenticed to a local potter. Her mother Mary offers little comfort or kindness, more noticeable when Hannah briefly stays with the potter’s family where the matriarch Emma is warm and sensitive: ‘It was a cold welcome back. No smile. No embrace. Not the smallest hint of affection. That part of Hannah which had flowered in the warmth of Emma’s kindness curled up close like a bud caught by the frost.’ (p69)

Hannah is bright and was a good student and learned to read and write; so she is taken on by the local lord’s wife to work in the laundry. In no time at all she progresses from that drudgery to assist in the kitchen and thence as a lady’s maid to Ursula, the lord’s daughter. The unlikely pair are soon firm friends, and it seems Hannah’s on her way up in society. Then tragedy strikes and Hannah is cast out and decides she will not be a servant again so instead takes on the role of a fisher-woman. Yet Hannah is indomitable and will rise above all setbacks, of which there are plenty: the affairs of the heart press strongly but she resists; and there is danger and attempted rape.

Throughout, resilient Hannah is true to herself. The privations of the period are leavened with poignant moments and the generosity of spirit of many characters, both male and female.

The Geordie vernacular is used on occasion but is almost always comprehensible; there’s also a glossary on p351.

The author wrote a sequel, Hannah’s Daughter, but I have not read that yet. Her writing style is excellent and she has a deft way with describing nature as well as individuals.

Interestingly, the author hailed from Whitley Bay, my home town in Northumberland (now Tyne & Wear). That fact drew me, as did the title character, Hannah, which happens to be the name of our daughter; additionally, the character’s surname belongs to a lifelong friend: Robson is quite common in the region. There is mention of many places familiar to me – Beamish, Druridge Bay, Newcastle, and Tynemouth.

If you enjoy stories with strong female characters, then this is right for you. Recommended.