Dead Burying the Dead Under a Quaking Aspen - book review 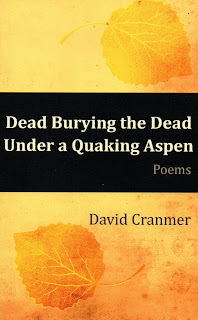 Screenwriting guides advocate “leave plenty of white space on the page”; effectively, “less is more”; or “give the reader/viewer space to visualize”. David Cranmer accomplishes that with this slim yet thoughtful and often poignant book of 29 poems. Indeed, his words “create fuel for the soul” – “The Need”. Herein you will find a “carefully crafted house of words” – “Daughter”.

The range of subject matter is considerable. From Haiti to Texas; from New York to the intergalactic void of space.

“The Inconsiderate” puts you into a grim gory scene laid out by the dreaded Tonton Macoute, for example.

Cranmer has the neat knack of sometimes deliberately forcing a space – a pause – in a line, mainly to make it more telling. Of course poetry is best appreciated when read – the listener gets the cadences, soaks up the emotion through the tone.

“reaching out to take my hand

Many of the poems feature death in all its guises. He quotes Martin Amis pointing out that “poetry alone… can face death on anything like equal terms.”

As Cranmer says in “Blue”:

“capturing the poetry of a slow death.”

There’s the unresolved murder of Hugh Chaffin, a man who loved gardening and was bound, gagged and bludgeoned to death; there’s the internationally abhorred murder and dismemberment of Jamal Khashoggi, journalist and a resident of Virginia.

And there’s the poignant “On the Border” where the narrator is visiting his Mom in a hospice and is reminiscing about those times when they’d watched westerns on TV together. “Except in these rooms, Alzheimer’s is the ruthless gunslinger.” He swats a mosquito and feels like a “much-needed paladin” – a fine reference to Have Gun Will Travel.

Perhaps pride of place must go to “Under the Quaking Aspen” where a few moments spent with his daughter Ava prove almost ineffably tender. His wife Denise is not forgotten: for their daughter is “cut from a priceless diamond”.

A fine production that will bear re-reading.