Boom in e-books – my way forward

Reported in City & Finance, Daily Mail, August 27: The CEO of Bloomsbury, Nigel Newton is looking forward to tapping into the boom in digital books. ‘Newton believes Britain is “one year behind America”, where e-book sales trebled in the first six months of 2010 to £120m. The report ends, ‘With a £33m warchest, Newton is looking for further acquisitions after beefing up its non-fiction wing following a spate of recent takeovers.’ So small-to-medium publishers had better watch out. I’d like to think his acquisitions would be new authors rather than other publishers, but maybe I’m being a bit naive there.

Anyway, I’m embracing the e-book. I’ll still buy and treasure printed books and wherever possible I’d like to see and hold my books in print, but e-books have their advantages too.

In light of the above, I’ve accepted the job offer of editor made by Gary Dobbs, the chief western editor for Solstice Publishing (pictured right in pensive mode). 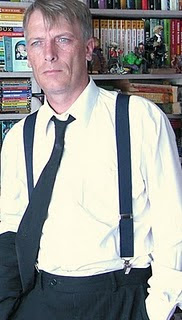 Gary achieved the impossible by getting his Black Horse Western Tarnished Star to outsell any other Hale westerns and in record time. His Tainted Archive blog is worth visiting regularly too. He has constantly banged the drum for a western revival in books. And he is the driving force in getting the Edge gritty western series by George G Gilman into e-book format (published by Solstice). This western line for Solstice is shaping up into an exciting project and I’m honoured and pleased to be a part of it.
Posted by Nik Morton at Saturday, August 28, 2010 8 comments:

Pleased to see that The New Coastal Press monthly magazine is featuring one of the 21 stories in Spanish Eye - a shorter version - plus plugging the book. The nice thing about it is that the magazine's cover illustration is for the story, 'Adopted Country'.

For a couple of weeks, you can access the magazine at the link shown below. If you want to read it at leisure, then I'd advise you download it. The story is on p16.

On Thursday afternoon, I had a telephone interview to talk about Spanish Eye and the character Leon Cazador. It was on The Hannah Murray Show, Talkradioeurope.

Extract of Talkradioeurope listing:
19 August
2:20 - Nik Morton - Author of 'Spanish Eye' - Private Investigator Leon Cazador is half-English, half-Spanish and wholly against the ungodly. He is indeed a man driven to hunt down felons of all kinds, to redress the balance of good against evil. Sometimes, Cazador operates in disguise under several aliases. In his adventurous life, he's witnessed many travesties of justice, so as a private investigator, he will use his skills.

There's a 'listen again' button on the website but it may be a while till the August interviews are loaded. It was an interesting experience. A TV interview is scheduled for early September.
Posted by Nik Morton at Saturday, August 21, 2010 3 comments: