Bob Jenkins – ink in his veins


A native of Portsmouth, England, Bob died on the evening of 24 September as a result of bone and prostate cancer. I first got to know him when he was publishing a short story magazine, Ad Lib in the late 1980s. He was an ex market stallholder, an ex journalist and could turn his hand to almost anything. This was before the computer and the Internet would dominate publishing. I illustrated a few editions of Ad Lib before it folded, among them stories by Arthur C Clarke and Jeffrey Archer. After that, we met infrequently, usually at his market stall in Portsmouth, where he sold second-hand books, or the nearby pub. My career in the navy took me away and we lost touch. Then he hit upon his money-changing concept and Intercash was born in 1993. Rumour has it that he soon became a millionaire. True or not, he employed a number of staff and Intercash expanded over the years. The origins can be read here, http://intercashuk.com/newsite/aboutus.php, written in Bob’s inimitable style.

Some years later, while I was redundant and looking for a change in direction, away from IT, I stumbled on a copy of the Portsmouth Post magazine and realized that Bob was not only the editor but publisher. He was looking for a sub editor so I got in touch and the job was mine. It was a popular monthly magazine, and great fun to work on. Incredibly, workaholic Bob handled the magazine and also his Intercash empire at the same time, no mean feat. He fought the weed and demon drink, two accessories that seemed appropriate for his journalist personality. He was quick witted and sharp as a knife where puns and article headlines were concerned. His DIY articles were written under the pseudonym of Matt Black, gardening tips by Daisy Cheyne and general articles by Doug Deepdown. He wrote short stories and novels under several names, too. His output was literate and prodigious. Recently he was working on the final draft of a 200,000-word Victorian crime novel set in Portsmouth.

When I moved to Spain, Bob kept me on at the Portsmouth Post and we worked on the magazine remotely. However, he flew me back to UK once a month for a week to get the magazine finished and ready for print. I still remember those bacon butties we’d enjoy of a Saturday morning, just the two of us, while beavering away in the office.

Above all, Bob was a people person. He seemed to be known by people from all walks of life, a genuine character. He didn’t suffer fools gladly but he repaid loyalty with trust, help, his time and advice, and was very protective about his staff. He championed local causes in his magazine, from the victims of illegal car clampers to the local hospice. He loved cricket, dog racing, radio and history, writing about all of them with great flare and passion. His great loves were Portsmouth city and Pompey soccer team and the former is enshrined in the website he created: http://nowportsmouth.co.uk/about-2.html 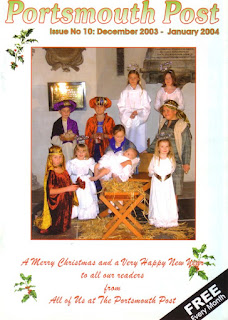 He thought the world of his extended family, and wasn’t averse to a little nepotism from time to time, putting family members on his magazine’s cover. The Christmas 2004 issue featured his grandchildren, nephews, nieces. Bob Jenkins was a very generous soul and he will be greatly missed.