My short story, ‘The House Always Wins’ was the genesis of my second Black Horse Western, Last Chance Saloon. It can be found on p16 of the magazine New Coastal Press, which can be found at:

The magazine can be downloaded as a pdf and read at leisure; it will be replaced by the February edition in a couple of weeks or so.
Posted by Nik Morton at Monday, January 31, 2011 No comments: 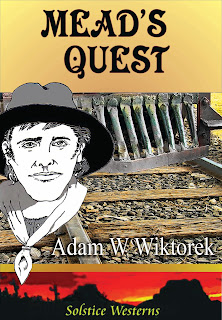 The second book from Solstice Westerns is Mead’s Quest, which is set in the early days of last century. The blurb tells of a poignant story that just also happens to be a western novel.

Idaho, 1906. Seventeen-year-old Jacob Mead was glad to see his pa buried. He wanted to be free of him and the ranch – but it wasn’t that simple. His past, painful though it was, held an astonishing surprise: an inheritance beyond his wildest dreams. It had something to do with a small leather ledger, the railroad and a family he’d never known. Leaving the ranch might help him locate his roots.

The clues were scant, the trail was cold, but the result of Jacob’s quest would be stunning.

Unfortunately, his sudden wealth attracted Neil Browning and his cousin, Randy, who had plans on relieving Jacob Mead of his money and his life. There will be bloodshed and tears before long.

Jacob’s story weaves movingly through the lives of an intriguing assortment of people, plunging him into danger, terrible anguish and heart-stopping delight as he tracks down members of his family during the awakening of the Twentieth Century.

Jacob’s heart is big and forgiving, it seems, which is just as well. His life wasn’t particularly easy or good, yet he transcends the pain and anguish to become a decent man; though he recognizes that he needs to better himself, get educated, and find his roots. His quest is long and full of surprises for the reader and him. It’s something he needs to do to find closure, something that many in his position were never able to accomplish.

“America's orphan trains delivered more than 150,000 children across the land to whomever would take them. Jacob Mead was one, taken in by an abusive man and his almost equally abusive wife. His struggle to survive, to become a responsible man, and to find his missing siblings forms the core of Mead's Quest. A startling tale of life and death as the West stumbled into the 20th century.” – Chuck Tyrell, international prize-winning author of Vulture Gold, Hell Fire in Paradise, and The Snake Den.

A touching, sensitive, suspenseful story, I was moved to tears. — W. Jenkins

The plot is solid and fascinating. It is a story based on fact and it carries with it a strong feeling of reality. — D. Hays, Statesman Journal literary editor.

I must say that Mead’s Quest was one of the best books I’ve ever read. The characters had believable emotions, Neil Browning was the perfect bad guy, the setting, the time period, everything was just wonderful. I can’t wait for the next book to come out. — R Cox

While these books are only available in electronic format at present, there’ll be print versions published in about ten months.
Posted by Nik Morton at Sunday, January 30, 2011 No comments: 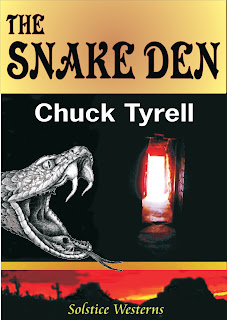 A few months ago, I was appointed as Chief Editor of the Solstice Western imprint of the US publisher Solstice Publishing. The first two e-books are now available from online bookstores, with more on the way. Each cover image maintains the feel of the imprint while also promoting the strong storylines. You can order either or both at the links on the left.

These tales are not your typical westerns with men in white and black hats shooting it out. There are many facets to both. Take the blurb for The Snake Den, for example.

The Mexican Zapata wants to stick him with a knife, the warden wants him to mend his thieving ways, and the sergeant of the guard wants to get into Shawn’s pants. If he won’t do what Sergeant Tarkington wants, he’ll end up in the Snake Den, a cube of iron straps hung from the ceiling of a dark cave. If he doesn’t do what Zapata says, he’ll end up with a nail sticking out of his eye. If he can’t convince the warden that he’s not a thief, he’ll spend his days tromping Colorado River mud to make adobe bricks.

Is his young life going to be made up of beatings, rape, and incarceration in the deadly Snake Den? The odds seem stacked against young Shawn ever getting out of Yuma Prison alive.

The Mexicans hate the whites, the Chinamen and blacks stay out of the way, and the whites fight among themselves. Somehow, Shawn must learn how to defend himself, and chance throws him in with Shoo Lee, a cellmate, an Oriental proficient in the barehanded fighting technique Kara Ti. Perhaps if he becomes Shoo Lee’s disciple he can endure...

Advance review copies have picked up good comments, too.
“Remarkable. A page turning thriller set in a frontier prison where a boy convict learns about the tough world of survival as he grows into a man. Told with gritty courage and honesty – a surprising blend of East and West, it’s a coming-of-age story like none you’ve ever read.” – Corinne Joy Brown, author of McGregor’s Lantern, Sanctuary Ranch, and Come and Get it!

“Chuck Tyrell has brought authenticity and poignancy to a western with a difference...”
– Jack Martin, author of The Ballad of Delta Rose.

I’ll feature the second book in a separate post. While these books are only available in electronic format at present, there’ll be print versions published in about ten months.
Posted by Nik Morton at Sunday, January 30, 2011 No comments:

Sorry I haven't updated this blog for several weeks. While the festive season might have been an excuse, it was only part of the story. Both my wife and I succumbed to a popular bug - we wre not alone! - and were laid low for two or three weeks. Jen is only now recovering her voice - a bind, since she loves to sing... Then we were host to our old friends from UK for two weeks...

Maybe posts will appear more regularly from now on.