Robert Radcliffe’s  2003 novel is Upon Dark Waters written as if the events and characters were real, and the author succeeds, even though the ending is disappointing. Real life can be disappointing. But it can also be glorious, romantic, colourful, dangerous and touched by remarkable bravery. 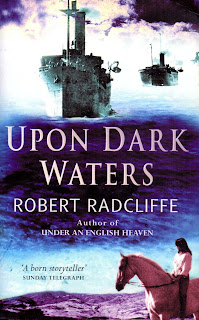 It’s 1942 and the narrator, Stephen Tomlin, is a new Midshipman on the corvette Daisy; the ship is one of several tasked with convoy duties in the North Atlantic. The depiction of the convoys is excellent, and the ship’s crew are believable characters, from the captain to the lowliest crewman.

One of the characters on Daisy is Sub Lieutenant Michael George José-Luis Quemada Villiers, RNVR. His story is told in the third person, and essentially the book is about him. He was born ‘sputtering and bloody into the world…’ in Uruguay. His mother was a beauty, Aurora who married an English diplomat. It reads like a family saga, but it’s interspersed with the survivors in a rowing boat in the Atlantic. Well researched, with an intense feeling for the people of the pampas, the story races towards the historic Battle of the River Plate.

At the front is a double page spread diagram of the ship: 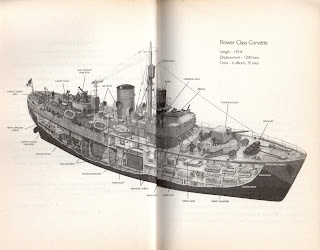 Robert Radcliffe is the pen-name for Robert Mawson.
Posted by Nik Morton at Thursday, July 20, 2017 No comments:

My trilogy of ‘Cat’ books for the publisher Crooked Cat Books:


The protagonist is Catherine (Cat) Vibrissae, born in 1985.

Cat’s also a fashion model, with the catwalk name of Cathy Gledhill

Cat has bronzed, tanned features – weather-beaten from free rock climbing, one of several sports she pursues when time permits.

Cat’s clothes are a mixture of designer and High Street.

Cat has a running vendetta against Loup Malefice and his company, Cerberus, which comes to a head in China at the end of Cataclysm.

Here are the three excellent covers: 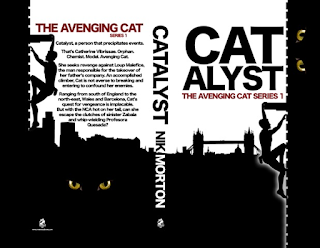 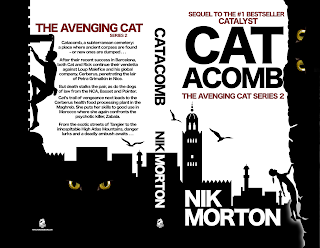 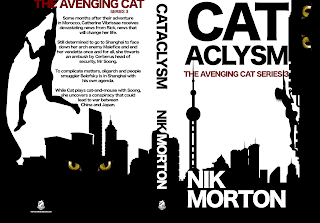 
Here’s a review of the paperback Mission: Prague, the first in the Tana Standish series:

There’s a particularly nifty twist to this espionage adventure, set behind the Iron Curtain in the mid-1970s. The smart, sexy female protagonist isn’t just a rare survivor from Warsaw’s WW2 ghetto. Nor is she merely a highly skilled covert operative, brought up by the British military establishment to be extremely effective against the KGB and its cohort agencies when she’s behind enemy lines.
Nope, Tana Standish has one more thing going for her: psychic talents.
These attributes don’t make her an invulnerable or less-than-credible superwoman. They’re neatly underplayed, a talent which isn’t understood or entirely controllable but which frequently tips the odds in her favour.
This mild shift into the land of ‘maybe’ is carefully contrasted with the grim, grey reality of life in Czechoslovakia in the Seventies, brought to heel seven years earlier by Soviet tanks, its citizens stifled by the relentless brutal mechanisms of an efficient totalitarian regime. An underground resistance cell has been compromised; a British agent fled and the Czechs are scared. Tana is assigned to put the network back together and use her special talents to ascertain if comms have been compromised, or worse.
The result is a running chase through the back streets and sewers of Prague, where the protagonists barely taste their black bread and spicy sausage between violent and amorous encounters….
The best scenes are the one-on-one confrontations, claustrophobic closed room battles of expert second-guessing. One particular superb scene is beautifully choreographed and delivered, dragging the reader into the sweat-soaked reality of being stalked by a stronger killer… a simply chilling chapter, the best in the book, where Tana must marshal all of her mental strength to resist the worst (and it is very bad) that her opponents employ against her…
Mission: Prague is a rollicking read, an intriguing mix of action-adventure, actual events and augmented espionage.

Available from Amazon as an e-book or paperback: http://authl.it/B06XFY7LLV

Interesting, when I search for Nik Morton in the Books category on Amazon.co.uk, it shows:

And when I do the same for Amazon.com, it shows:

Bestselling Books:Write a Western in 30 Days: With Plenty of Bullet-Points!, Old Guns. Ross Morton, The $300 Man.

The common sale denominator is my non-fiction writing guide, which has sold over a 1,000... Still, it's nice to see Tana Standish up there. Btw, both Old Guns and The $300 Man are selling at bargain prices!

Interesting to me, anyway...

If you print out the image below, hey presto, you've got a bookmark! 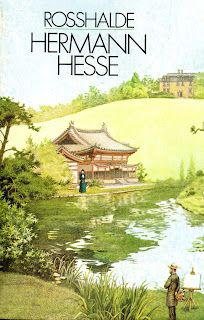 Hermann Hesse’s short novel Rosshalde (1914) is told from an omniscient point of view. The painter Johann Veraguth bought the property and land Rosshalde and built a studio where he could avoid his wife, Adele. His older son was sent off to boarding school and his young son Pierre, aged seven, rarely crossed the studio’s threshold. Hesse was a painter and this book possesses autobiographic elements: his marriage began to disintegrate, partly due to his wife Maria’s mental issues. However, it’s quite possible his obsession with writing might have been a factor. Certainly, his character Veraguth only seemed content when painting.  ‘… he recaptured the industrious tension which tolerates no digressions and concentrates all our energies on the work in hand.’ (p11) He was incapable of perceiving his poverty of existence: he strove to perfect his works of art, yet ‘bungled his attempts at love and life’ (p73)

Gradually we learn that he made difficult demands on his wife, nothing specific, but it harmed their relationship deeply. ‘… though she had ceased to love her husband she still regarded the loss of his affection as a sadly incomprehensible and undeserved misfortune.’ (p13)  He admits, ‘I kept demanding the thing that Adele was unable to give…’ (p47)

Hesse illuminates scenes with a painter’s eye: ‘The little lake lay almost black in the total silence, the feeble light lay on the water like an infinitely thin membrane or a layer of fine dust.’ (p3) He was also a student of nature: ‘… the declining sun shone horizontally through the tree trunks and golden flames were kindled on the glassy wings of the dragonflies.’ (p27) And, in the drizzle, ‘the wet smooth trunks of the beech trees glistened black like cast iron.’ (p65)

A catalyst for change is the arrival of his friend Otto, who lives in India. He brings with him many captivating photographs of the exotic land.

[An aside: Strange coincidences abound in my selection of reading, it seems. I read March the Ninth by R.C. Hutchinson which concerned partisans in wartime Yugoslavia; next I read Alastair MacLean’s Partisans, about the same subject; yet random choice, entirely unplanned. Then I read Legacy by James Steel, where one of the protagonists is called Otto, and here in this book we have Otto!]

A friend has observed that the phrase ‘eyes narrowed’ is overused and perhaps not quite accurate. Here, Hesse avoids falling into that common trap: ‘Pierre froze. He closed his eyes except for a small slit and glared through his long lashes.’ The son’s relationship with the manservant Robert is at times amusing. Another writerly bugbear is ‘the movement of eyes, as if levitating entities in themselves – when it should be described as a gaze. Even Hesse (or his translator) succumbs: ‘(she) let her eyes roam idly over the flowers, the table, the room…’

Hesse deplored the strident nationalism leading up to the First World War; in protest against German militarism he exiled himself to Switzerland in 1919. While on a vacation at home, the eldest son Albert says he hates his father. His mother retorts: ‘Hate! Don’t use such words, they distort everything.’ As true today, as it was then.

It is quite possible that Hesse had seen or read J.M. Barrie’s Peter Pan (1904). He has Pierre say: ‘… when old people get older and older, they die in the end. I’d rather stay the way I am, and sometimes I’d like to be able to fly, and fly around the trees way up high, and in between the clouds. Then I’d laugh at everybody!’ (p39)

Illness in the home affects the family. Adele’s ‘balance had been shaken, she felt as though she were sitting on a limb that was being sawed off.’ (103)  This is a turning point for the painter. ‘It was as though his life had become once more a limpid stream or river, driving resolutely in the direction assigned to it, whereas hitherto it had stagnated in the swampy lake of indecision.’

How he makes his decision, and what it is, is annoyingly hinted at in the blurb; an unforgiveable spoiler. Indeed, it reflects Hesse’s own actions of 1911. Whatever loss Veraguth experienced, he had his art. 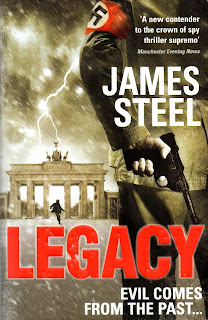 The cover and blurb are misleading, but that’s not the author’s fault: Nazis do figure in the story, but in the past; the Manchester Evening News view that Steel is ‘a new contender to the crown of spy thriller supremo’ is misplaced for this book, though it might be appropriate for December.

Legacy is interesting, though flawed.

There are three narrative strands.

1) Germany, 1520s, concerning knight Eberhardt von Stelzenberg, who miraculously survives the Knights War and the Peasants’ War; he is convinced there is truth in the Dark Heart Prophecy that will destroy Germany.

2) Germany, 1941, concerning SS Major Otto Hofheim, whose heart is dark. He is tasked with by Himmler with seeking out the Dark Heart in Africa, a weapon hinted at in the writings of Eberhardt.

3) England,/Africa/Germany, the present (2010), concerning Alex Devereux, former cavalry major and now a hardened mercenary, hired by the mysterious Kalil to capture a diamond mine in the Central African Republic.

Each scene change/time-change should be indicated consistently, but this is not the case; some shifts are, others are not, which can momentarily cause confusion in the reader.

While Eberhardt’s story is of interest, it is clear that it has been shoehorned into this ostensible thriller because the author was fascinated by the characters and the period. In fact, apart from the vague reference in the old knight’s writings, it has no relevance to the other two story strands and could have been dispensed with entirely.

The Nazi Otto is brave, a man who leads from the front and has earned his men’s approbation in conflict. However, he is an unpleasant character with no redeeming features. His brief love affair with an ally, an Arab woman, cannot gloss over his blood-soaked history. His quest into the African jungle proved fruitless and the narrative seemed rushed.  There is a twist, linking Devereux and Otto, but it wasn’t a surprise.

At least Alex Devereux is in the mould of a modern hero. Though he feels he has to prove himself. He is bold and businesslike, getting the project off the ground. Yet he comes across as emotionless; when two of his comrades are killed in the onslaught against the mine, he is elated at their success but doesn’t spare a thought for those deaths.

The final revelation concerning the ‘prophecy’ is a disappointment. The blurb ‘A medieval prophecy with the power to change the world’ is pure hokum; don’t blame the author, though, blame the publicists and editors.

The book would have benefitted from a better editor; there are too many echo words close to each other. And characters ‘think to themselves’…!  And the time-change headings should have been consistent, as stated.

The history, the character sketches, the military hardware, all appear to be authentic, however, and the book has a few suspenseful moments and has pace in parts, which redeem the author.