Book of the film: To Kill a Mockingbird 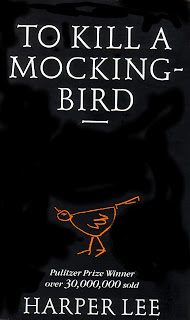 It has taken me a long time to get round to reading this book, first published in 1960. Maybe I was daunted by the fact it was a Pulitzer Prize winner and had sold in excess of 30 million copies. I’m glad I waited since I suspect I gleaned more from this as a mature reader than as an adolescent, though I could be wrong there as its appeal is very wide indeed.

Set in the 1930s Deep South, it deals with truth, the lot of Negroes, a small town’s prejudice and hypocrisy, and the bravery of an individual with principles – ‘The one thing that doesn’t abide by majority rule is a person’s conscience.’ – Atticus Finch.

Its author, Harper Lee, was 34 when she wrote this, her only book. Its huge success – the film of the book being released in 1962 – must have had some effect on the racial Civil Rights politics at the time. From 1865 to 1877 strides were made toward equal rights for African-Americans; Southern black men began to vote and were elected to the United States Congress and to local offices such as sheriff. Yet it was not until 1965 that an Act was passed to outlaw discriminatory voting practices that had been responsible for the widespread disenfranchisement of African Americans in the United States. Maybe Harper Lee’s popular book helped in some small way.

The book begins in classic mode, reflecting on events that are actually revealed at the end of the narrative. Eight-year-old Scout (Jean Louise) and her thirteen-year-old brother Jem (Jeremy) are the children of widower Atticus Finch, a lawyer of the town of Maycomb, Alabama. The narrator is Scout who is reminiscing about her childhood past, hence the adult language used in her descriptions. It’s never explained why she is nicknamed ‘Scout’. Anyway, she immediately endears herself to you with her self-deprecating good humour and generally amusing observations: ‘With a click of her tongue she thrust out her bridgework, a gesture of cordiality that cemented our friendship.’

The siblings refer to their father by his first name, much to the consternation of their disapproving and distant relatives; it makes for easier reading, anyway.

The household helper and cook is Calpurnia, a Negro with infinite patience and a heart of gold, more a member of the family than hired help. She, along with so many characters in the town, is drawn with sure strokes so we get to know them, which is the true measure of a good author.

Most towns probably have a house that invokes gossip and tall tales about things going bump in the night. Maycomb is no different. The Radleys’ place is where, at risk of some unspeakable death, children dare to sneak into the yard and touch the walls. Boo Radley hasn’t been seen in years and this causes more stories. Gregory Peck, who starred as Atticus and won an Oscar for the part, said: ‘The characters of the novel are like people I knew as a boy. I think perhaps the great appeal of the novel is that it reminds readers everywhere of a person or a town they have known. It is to me a universal story – moving, passionate and told with great humor and tenderness.’

When Tom, a Negro, is accused of raping a white woman, Atticus is selected as his defence lawyer. It’s obvious that Tom is innocent, but prejudice runs deep, it seems. During the court case, Atticus makes a moving strong plea about all men being equal, not in accomplishment or talent, which is nonsense, but in the eyes of the law – a laudable ideal that, even today, is tarnished by those with money.

Lee never completed another book and shunned interviews. Several sources state that her book was in large doses autobiographical; whether it is or not, the characters shine through as real people, a great accomplishment.

My copy was a reprint dated 1997; and it had been reprinted no less than 42 times in this paperback imprint. That annoys me just a little: there are easily thirty typing errors in the text – even one on the first page – yet no publisher considered correcting them in all those years. A shameful way to treat a classic.

From an editorial perspective, I found the first person narrative spot on. One very minor quibble which her editor Tay Hohoff seems to have missed: ‘One day… we did not see Atticus standing on the sidewalk looking at us, slapping a rolled magazine against his knee.’ (p44) If he wasn’t seen, he couldn’t be written about. Still, the image is a striking one and maybe that’s why it was left in.

From the outset, this was going to be a difficult novel to film. Inevitably, voice-over was employed (by Kim Stanley), ostensibly the mature voice of Scout. Horton Foote won an Oscar for his Adapted Screenplay, deservingly so, considering the difficulties of transferring Scout’s memories to a visual medium. It’s an accomplished piece of work, judicially leaving out certain scenes, events and characters from the novel while combining the odd character here and there, all the time preserving the truth and integrity of the original.

Any re-reading of the novel will mean that the mind’s eye sees Gregory Peck as Atticus, the part he was born to play.
Posted by Nik Morton at Sunday, May 24, 2009 5 comments:

Beat to a Pulp - Spend it now, pay later

I'm pleased to mention that the popular short story online magazine BEAT TO A PULP is featuring one of my short stories this week - Spend it now, pay later.

You can read it at http://www.beattoapulp.com/pulp.htm.

I'd also recommend reading the archive stories. You can also leave comments on each tale, which is great for the authors; authors love feedback (mostly, anyway). Many thanks to David and Eileen for producing an always interesting and innovative outlet.
Posted by Nik Morton at Saturday, May 09, 2009 6 comments:

Book of the film: Psycho 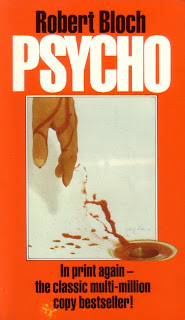 Thanks to the Alfred Hitchcock film, the character Norman Bates has entered that dubious pantheon of modern myth. Of course reading this book after being aware of the movie destroys some of Robert Bloch’s well-constructed suspense. Even so, it is still an intriguing and page-turning crime noir study of reader misdirection and dark psychology. And it’s also possible to appreciate the cunning structure of the novel and the subtle hints beneath the veneer presented by Bates.

Bates is fat and bespectacled and quite unprepossessing and dominated by his mother. He resents her but cannot seem to function without her in his life. He hides in his books but to no avail. He evokes some sympathy but is also somewhat unprepossessing. A memorable creation.

Mary Crane absconds from her job with a large sum of cash and heads for the home of her fiancé, Sam, intent on using the stolen money to help him get out of debt. She stops overnight off the beaten track at the Bates’ motel. The shower scene occurs on page 30, so she isn’t in the book much, but her presence is felt throughout as first Sam then her sister Lila start to wonder where she has gone. They are aided by the insurance private detective Arbogast.

Bloch masterfully weaves the individual stories of Bates, his mother, Mary Crane, Sam, Lila and Arbogast. His story is unsettling since it seems that the main protagonists are not destined to survive. Then those who do remain are brought to the creepy storm-laden denouement.

This is a short book, with hardly any words wasted in deceptively simple prose. Usually, Bloch enjoys peppering his stories with wordplay but here the narrative doesn’t seem to need it – though he can’t resist one final foray in the last sentence.

Inevitably, a film script is going to differ from its source: Psycho was in fact a difficult book to film as there was a great deal of internal monologue to create character, move the story forward and to misdirect. Some of this was achieved by voice-over for thoughts. Apparently, as there was a real Mary Crane in Phoenix at the time of the film, it was decided to rename this character Marion (played by Janet Leigh). Her boyfriend Sam and the detective Arbogast kept their names, as did Bates. The Marion character didn’t succumb in the shower scene until the film was 40 minutes into the story, with just over an hour to go. Neither in stature nor appearance did Anthony Perkins resemble the Bates character in the book, but he certainly claimed the role as his own with creepily nuanced under-acting.

If you have only seen the film but not read the book, I’d recommend finding a copy; it’s worthwhile. The entry for the film in Wikipedia is quite comprehensive and fascinating.
Posted by Nik Morton at Thursday, May 07, 2009 2 comments: