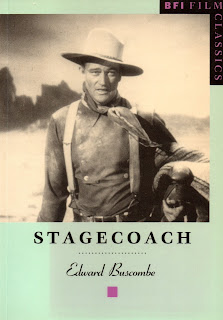 This 95-page appraisal of the classic 1939 John Wayne/John Ford film (published in 1992) is written by Edward Buscombe, who is also the editor of The BFI Companion to the Western.

Seven of producer Walter Wanger’s pictures for United Artists hadn’t made a profit. So Wanger was told to rein back his budgets. Ford’s project to film ‘Stage to Lordsburg’ appealed: ‘a talented, tested and prestigious director, relatively unknown and therefore inexpensive stars and a type of story which, even if Westerns were not fashionable, was nevertheless of proven appeal.’ (p17).

The filming lasted about two months. But due to Wanger’s financial situation, UA wouldn’t agree to filming in colour, which was a great shame, considering the spectacular vistas presented by Monument Valley. At that time colour added about 30% to production costs. The film came in under budget, costing about $531,000. The salaries of some of the picture’s stars were Claire Trevor, $15,000; Andy Devine, $10,000; Thomas Mitchell, $12,000 (and he won an Oscar for the part too!); John Wayne, $3,700, considerably less than four other travellers in the stagecoach! (p18)

Essentially there are two narrative strands to the plot: first, a journey through dangerous terrain, echoing The Odyssey; second, revenge, which is as ancient as the Greek myth. The latter is ‘driven by the hero’s sense of personal honour, an inner compulsion rather than an external threat.’ (p25) And the theme emphasises that good prevails over evil.

One of the reasons for the film being a classic is the canny juxtaposition of the nine travellers in the stagecoach, and how they rub against each other, revealing their characters. The driver Buck, the whiskey drummer, Peacock, meek in character and temperament (played by Donald Meek), the Southern gambler Hatfield who is not quite the gentleman he likes to think he is, the disdainful and felonious banker Gatewood who is anxious to abscond, the wan wilting flower of womanhood, Lucy, keen to join her cavalry officer husband, well-oiled Doc Boone, evicted from the town for drunkenness and not paying his rent, escaped jailbird Ringo Kid, joining the coach a short way outside town, shotgun rider Sheriff Wilcox (who promptly arrests Ringo), and Dallas (who ‘is never actually named as a prostitute, but only the young and innocent Ringo does not instantly recognise her profession’[p37]).

Between the lines, Ford reveals that ‘respectability and morality are very far from being the same thing.’ (p37)

Needless to say, screenwriter Dudley Nichols had to considerably enlarge upon the original short story. Lucy, the army wife, is not pregnant in the story; Nichols’s injection of her gravid state and the subsequent birth seem ‘expressly designed to give the film appeal to a more mixed audience.’ (p54)

Due recognition is also given to stuntman Yakima Canutt: ‘his contribution to the film was considerable,’ with examples. (p67)

Interestingly, Orson Welles confessed he learned to be a director by watching John Ford’s films: ‘John Ford was my teacher. My own style has nothing to do with his, but Stagecoach was my movie text-book. I ran it over forty times.’ (p58)

The book concludes with details about the press releases, the film’s overwhelmingly positive reception, and John Ford’s subsequent career and status. Throughout, the pages are interspersed with black-and-white stills.

An excellent insight into a piece of cinematic history.

There are many other BFI Classic books available; check them out on Amazon – search for ‘BFI Classics’