Some time ago I published a regular monthly magazine column linking a set selection of dates in history. The series was popular. I'm busy coordinating the articles into book form. As today is 22 June, here are a number of linked events for that date plus two other June dates. To avoid repetition, I've simply indicated the relevant date in brackets. Apologies for the length of this entry! The three dates for this article are:


If memory serves me right, June in England seems to be a time for pleasant warm evenings watching cricket on the village green, though it’s also the month when fetes are invariably washed out. That’s only one reason why many Brits have become expats in Spain! In 1896 J T Hearne set a cricket record for taking 100 first-class wickets (12).


Then in 1931 forty-eight-year-old Charlie Parker (not the Jazz musician!) equalled Hearne’s record (12); a day later, Tich Freeman achieved the same record. William Attewell was another bowler who took 100 (not first-class!) wickets (in 1884). He played in ten Tests; he was born (12) in 1861 and actually died a day before his birthday in 1927.


Still on the subject of sport – the sport of kings. The Epsom Derby in 1913 was sadly marred by a suffragette, Emily Davison, running out in front of the king’s horse Anmer (4). She was trampled underfoot and died a few days later. In 1994 sports superstar O J Simpson was accused of killing his wife Nicole and Ronald Goldman (12); he was acquitted though held liable in a civil case.


Eight years earlier Argentine soccer maestro Diego Maradona scored (22) against England during the World Cup in Mexico City. You know, that game where the Hand of God scored the winning goal.


Hot air ballooning is regarded as a sport, too. And it all started in 1783 when the Montgolfier brothers demonstrated (4) their hot air balloon. 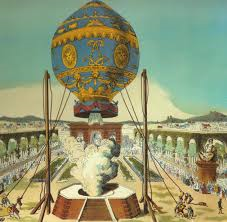 Montgolfier balloon - Wikipedia commons
Another pioneer in flight was the pilot of the Gossamer Albatross, which flew across the Channel in 1979. It was man-powered by Bryan Allen.


Irwin Allen produced many films, among them Five Weeks in a Balloon, The Poseidon Adventure and The Towering Inferno. He was born (12) in 1916. He was responsible for many science fiction series on TV, including The Voyage to the Bottom of the Sea and Lost in Space in the days when fiction was becoming fact, when, for instance, Venera 4 was launched in 1967 to become the first space probe to enter another planet’s atmosphere and successfully return data (12).


In 1633 views on the universe were very different: the Holy Office in Rome forced Galileo to recant his view that the sun, not the earth, was the centre of the universe (22). It wasn’t until 1992 that the Vatican recanted and effectively apologised for the treatment of Galileo.

A transit of Venus in 1769 was followed five hours later by a total solar eclipse (4); interestingly, on the same day in 780 BC the first solar eclipse was recorded in China (4).

On the same day Austrian astronomer Franz Xaver, Baron Von Zach, was born (4) in 1754 and he set out to find a predicted missing planet between Mars and Jupiter. His team located Ceres 1, which is the biggest rock in the Asteroid Belt that passes between these two planets.

In 1978 Pluto’s satellite Charon was discovered (22), some forty-eight years after the planet itself was actually found. Pluto was the Greek god of the underworld and Charon ferried the dead across the Styx to Hades; in August last year Pluto was declassified, no longer being a planet but merely a dwarf or minor planet, seventy-six years after its discovery.

Of course, instead of searching the heavens, many people simply explored our planet. One such man was George Vancouver, who was born (22) in 1757. He claimed Puget Sound for Britain (4) in 1792 and of course Vancouver in Canada is named after him.

Canadian actress Norma Shearer died (12) in 1983; she had been offered the part of Scarlett O’Hara in David O Selznick’s Gone With the Wind but he was overruled. Selznick died (22) in 1965; both he and Shearer were born in 1902.

Two of Selznick’s most popular films were Duel in the Sun, a western starring Gregory Peck, who died (12) in 2003, and The Third Man, based on the novel by Graham Greene. The Canadian actor Graham Greene, who captivated global audiences in Dances with Wolves, was born (22) in 1952.


The fifth century Capitoline Wolf statue symbolises the she-wolf suckling Romulus and Remus at the birth of Rome. It’s featured in the epic film Cleopatra, which premiered (12) in 1963.

Henry Rider Haggard, author of King Solomon’s Mines and She also wrote a novel called Cleopatra in 1889. He was born (22) in 1856; he stood unsuccessfully for Parliament for East Norfolk in 1895. His tales of Allan Quatermain inspired modern interpretations like Indiana Jones and Lara Croft.

Tomb Raider star Angelina Jolie was born (4) in 1975. Her film Tomb Raider also featured Daniel Craig, who is the current movie James Bond, as well as Richard Johnson, who was in the TV movie The Secret Life of Ian Fleming.

Ian Fleming was actually in Intelligence during the Second World War. In 1940 the end of the evacuation from Dunkirk (4) seemed to offer little hope for the European continent’s future, with Rommel accepting the surrender (12) of 13,000 British and French troops followed by France being forced (22) to sign an armistice with Nazi Germany.


And of course the war ended in that year with an Allied victory, thanks to Churchill’s leadership, among other factors. Prime Minister Churchill was succeeded in 1955 by Anthony Eden, who was born (12) in 1897. 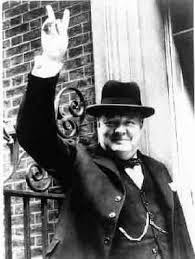 Perhaps because he was headstrong and stubborn, Winston Churchill didn’t get on well with fellow students in his early school years. He even had to hide behind a tree when some boys threw cricket balls at him. After this experience, he vowed to be as tough as anybody else. So with that cricket anecdote we’ve come full circle for this look at linking dates, people and events.