The Cat's got the cream

Well, that's what it feels like... Today, on my birthday, I received the signed contract from Crooked Cat Publishing for Catalyst, the first in The Avenging Cat series. This is my twenty-first book to be accepted/published. Thank you, Crooked Cat, for making my day!


Here is the beginning of Catalyst (subject to editing, of course); it’s only part of the chapter…. The sequel, Catacomb, is a work in progress.

Chapter One: Cat among the pigeons


Rock climbing was much easier than this, Cat Vibrissae thought. She did that for a hobby – though never at night – and enjoyed it. But climbing the outside of a modern building was something else. How those people could do it for fun was beyond her. What were they called? Stegophilists. Oxford and Cambridge undergraduates started it when they scaled the college buildings in the late 1800s – always at night. She was used to the adrenaline rush of climbing with bare hands and feet on cliffs above rugged rocks and aggressive waves. But this was very different. Tonight the effects seemed more pronounced: she was sure that she could feel the increased heart rate and her gut constricting. And her mouth was very dry. Still, if she was going to fulfil her vow to her father, she had no choice. This was the only way to penetrate the seventeenth floor office of Rick Barnes.


Finding hand-holds on the face of a modern building was not easy at the best of times, but at night it was worse and had to be done by feel alone. Street lighting and advertising signs didn’t help this high up – but at least the darkness ensured she wouldn’t be visible. Here she would find no holes made by burrowing animals or nesting birds. Simply rigid straight edges of concrete and marble. Clean lean lines as envisioned by the architects. God, how she would dearly love to hammer pitons into the stone facade and secure a few karabiners and snap-rings and ropes, but that would make an unacceptable amount of noise and, besides, it would take far too long. But the ropes would have eased the strain on her fingers, wrists, arms and legs. Tough. Just get on with it.


If she hadn’t also done plenty of free climbing, she’d never have contemplated this. Her coach had used the phrase, “Make the geckos jealous.” Unfortunately, she didn’t have suction pad feet. At least her soft Five Ten Anasazi climbing shoes acted like “magic fingers” and enabled her feet to cling to the narrowest of ledges and feel the features she stepped on.


When she started this climb, the air had been quite calm, not too balmy, an ideal June evening, with hardly a breeze disturbing her long auburn ponytail. Refreshing, even. But now, fifteen stories up, the swirling air currents tugged at her slim-line backpack and black cat-suit and threatened to blow her off the side of the building. Specks of dust and leaves flicked against her cheeks; she was really glad she wore wrap-around goggles.


Toe tips only. Using her toes and not her instep allowed her hip a broader moving range to allocate her gravity centre as needed. The technique required her to move her hip over her feet – “follow gravity”, her coach had said. “The hip is the centre of gravity.” Simple, really. Placing her hip over one foot relieved both her other foot and her hands for the next move. And so on.


Keep calm. She passed behind the huge metal sign for CERBERUS WORLDWIDE, which, thankfully, wasn’t illuminated at this time of night.


Here, she decided to rest for a few minutes and looped a leg over a stanchion and suddenly her heart leapt as two disturbed pigeons flapped their wings and flew out and away, leaving behind a stomach-churning stink of bird-shit. At least the bird-flu scare had petered out; and since pigs can’t fly, there was no risk of swine flu either. Ha, ha…


The silly joke didn’t calm her, though. After that shock, her heart was hammering more than ever.


Two days ago it had been pounding for a different reason.

Cat’s heart quickened as Rick Barnes let her into his Richmond apartment and shut the door behind them. She brushed her slightly clammy hands down her grey pleated skirt. This was the culmination of two weeks’ dating, waiting for the right time to accept his invitation to stay overnight.


His grey-blue eyes glinting in the light from the chandelier. He seemed particularly dashing tonight in his black tux and bow-tie. “Yet another wonderful meal – thanks to your company, of course.”


“Of course,” she said playfully. How gallant. He smiled with slightly moist thick lips, lips she’d tasted on several occasions at her own rented apartment’s threshold. She had refrained from commenting on his rather large beaked nose, even though it was difficult to avoid; he almost gave her a black eye when they first kissed. It gave him a predatory aspect, but it was she who regarded him as her prey.


The wall-mounted telephone by the door rang. “Can you pour us brandy while I get that?” he said, and moved towards it.


“Love to.” She strode over to the drinks cabinet.


He lifted the phone, listened and spoke briefly. “I won’t forget, Loup,” he said. “Don’t worry. No, of course you don’t. The land purchase is going ahead, as planned.” He replaced the receiver and sighed.


She felt her legs tremble ever so slightly as she removed the stopper from the brandy. Her stomach was involved in some kind of African tribal dance, she felt sure. Anticipation or fear?


As Rick walked over to her, Cat turned her back to him, fingered her elaborate signet ring over his glass, and then poured a generous measure of the liquor into both glasses.


She turned to face him. His glass, she reminded herself, was in her left hand.


“It’s nice to see you have a good appetite,” he said, “not like most models I’ve met.”


She chuckled, liking his forthright appraisal of her. “I find that constantly walking up and down and quickly changing into fresh clothes burns enough calories.”


“It was. It wasn’t too hectic. February was murder, fashion weeks in both Madrid and Milan! Do you go to many clothes shows?” She handed him his glass.


“Thanks.” He didn’t bother drinking from it but eyed her. “I like beautiful women, so sue me.”


She sipped her brandy. The fiery liquid burned her tongue and sent tiny prisms of pleasure cascading round her mouth. She licked her lips and they tingled and she looked at him over the glass rim. “All week, you’ve flattered me. I’ve never been chased before.”


His thick dark eyebrows arched. “I’m surprised. Anyway, I also invest in a few clothes designers, if I like their stuff. I noticed a few there tonight: Christopher Bailey from Burberry, and also Julien MacDonald and Matthew Williamson.” He grinned. “I like to spread my portfolio, you know?”


“Models aren’t part of your portfolio, are they?”


He laughed, a warm deep sound, and ran a hand through his thick black hair. “No, of course not. I took a liking to you. A strong liking.” He clinked his glass against hers. “It seems to be mutual. Call it fate or chemistry, if you like. I think we get on really well, don’t you?”


Infuriatingly, he still hadn’t taken as much as a sip from his glass.


`Rick sipped his brandy. At last! She willed him to drink all of it.


“Manifesto Rossellini,” he announced, “if I’m not mistaken.”


“I’m impressed.” She was amused, despite herself. “Most men haven’t got a clue about fragrances.”


“My secretary, Mandy, she always uses L’instant de Guerlain.” He tilted the glass back, downed its contents and put the glass on the cabinet. Finally.


Then he shrugged out of his dinner jacket and slung it on the back of a chair by the mahogany desk.


She wondered if she’d find what she wanted in his desk’s drawers. Doubtful. “Really?”


“Yes.” He loosened his black bow tie and then fumbled with his waistcoat buttons. “I haven’t come across Rossellini in a long time, actually.” He moved near and she didn’t falter, her bottom against the edge of the drinks cabinet.


Rick leaned his head forward so that his nose was just above the hollow of her neck. Her ultramarine designer blouse was opened to show off her cleavage, but she noted he was enough of a gentleman to close his eyes as he sniffed delicately. “Hmm, it suits you.”


“Thanks,” she said, gratified. She’d been diligent in preparing for this night’s seduction, starting with a shower, body spray and then applying the perfume on her lower body and working her way up to her wrist, neck and cleavage, where it would stay warm longer and be more effective. That’s what customers paid for: expensive perfume lasted longer than cheap varieties.


He stepped back a pace and opened his eyes. “Allow me?” he asked, reaching out to the topmost fastened button of her blouse.


Cat put down her nearly full glass, the corners of her mouth twitching in anticipation. She studied his face as he unbuttoned the blouse. His lashes were long and fine. The touch of his hands as they brushed against her seemed to send electrical charges through her entire body.


“No, don’t stop. Me, I never got my Girl Guide semaphore badge…” She raised a hand, ran it over his craggy features, and it made a faint rasping sound. His firm jaw was already prickly with fresh stubble.


His steely gaze was penetrating. “I’m not quite the Boy Scout tonight, am I?”


Cat shook her head and smiled. “Maybe I can award you a badge of some sort.” She eased her arms out of the blouse and gently threw it on top of his jacket. Its sheer luminosity had evoked some gasps from the side of the catwalk earlier in the evening, she recalled. “We’ll see, later.”


That's all for now... In the meantime, my latest Crooked Cat crime novel Sudden Vengeance is available in paperback and e-book formats… 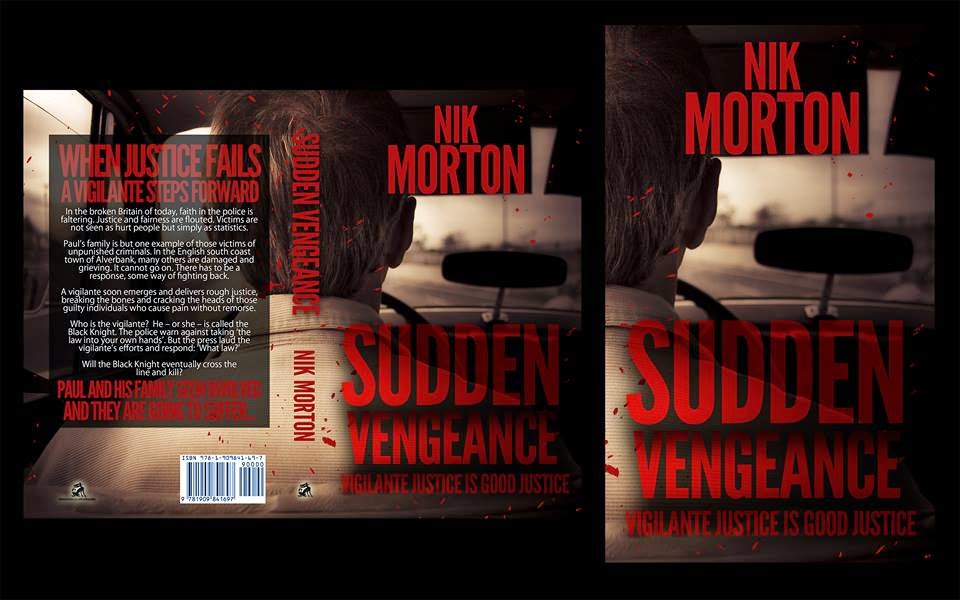