Subtitled ‘The Mangling and manipulating of the English Language’, this 2004 book (revised 2011) is an enjoyable rant from journalist and BBC presenter John Humphrys; you can almost hear his voice as you read it. ‘Have something to say and say it as clearly as you can. That is the only secret to style,’ said Matthew Arnold, the Victorian writer, and that’s what this book is about. 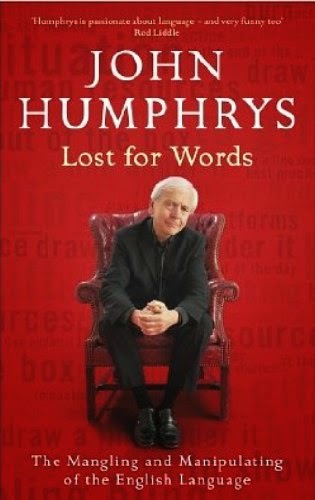 Humphrys hates sloppy overblown cliché-ridden language when it’s used by those who should know better – not least when it’s broadcast by the BBC. He hates jargon. He hates trendies who spout that rules confine language when in fact rules actually liberate it. As George Orwell said, slovenly language ‘makes it easier for us to have foolish thoughts.’


But most of all Humphrys hates the way our language is being mangled and manipulated by people trying to sell us things or, far more worryingly, ideas.


There are so many instances to point up his concerns. We lose good words when we use them wrongly but we also lose them when they become devalued. How on earth a soccer player can be regarded as a ‘hero’ is beyond me too. As Humphrys says, ‘You become a hero in football by doing something that carries no risk (except possibly jeopardising your vast salary) and for which you have been trained since you were old enough to lace up your own boots... Skilled footballers, yes. Heroes, no.’


He once heard a salad dressing described as ‘awesome’ and adds, ‘I wonder what that makes the in full flood or the Beethoven Quartets.’


None of us are without sin, but those who care do at least try to get it right. He’s not above castigating himself, either. So, nobody’s perfect!

Our language is showing signs of obesity. Tautology is ubiquitous and he offers some examples: future prospects, past history, future plans, safe havens and – believe it or not! - live survivors! You see signs along the road informing you of ‘delays due to an earlier accident’; all that should have said was, ‘delays due to an accident’ – unless someone has mastered time-travel, of course...

Humphreys’ concerns are mainly with the written word – that includes politicians’ speeches, since they’re written by a speech-writer or spin-doctor. Most broadcasters should have given what they’re going to say some thought then written it down before reading it out. He mentions one exception, however – when John Arlott was speaking on a live broadcast he always worked out exactly how his sentence would end before he started it.

Now we come to manipulating the language – telling us black is white or covering something up with a euphemism. In the eighties when British Rail announced it was abolishing second class travel, renaming it standard class, Bernard Levin pointed out that they were doing no such thing. So long as there’s a first class, whatever remains must be second. Then there are those job advertisements – such as, ‘Manual hygiene trainer’. The successful applicant for this one was to offer ‘hands-on’ advice to health workers with ‘particular attention to cross-infection minimisation’. Put simply, ‘teach them to wash their hands...’

You won’t be surprised to learn there are several sections in the book devoted to politicians. Humphreys actually likes them as a breed and considers many are hard-working and undervalued. But they all seem to fall into the trap of mangling and manipulating language – our language. They misuse our money, too – though they keep referring to it as ‘government funds’. The government invests money in certain enterprises, they say; the government can’t, as it doesn’t have its own money to invest; in fact, it has the tax-payer’s money to invest.

Newspapers, inevitably, are not immune. Clichéd language is second nature to journalists, such as: feelings always run high; doubts are always nagging; grinds to a halt; people die tragically (as opposed to joyfully), and so on... Headlines are an art-form and they mangle English due to lack of space and usually to raise a smile too.  Broadcasters can’t use that argument, though; as Humphrys points out, it saves precisely one ninth of a second to use a one-syllable word instead of a three-syllable word and no programme measures time in fractions of seconds.

Worse still, however, are those misguided if well-intentioned people who would fit quite nicely in George Orwell’s Thought Police from 1984. In the a white man who ran a municipal agency was forced to resign after he had described his budget as ‘niggardly’. Humphrys says, ‘This is not only etymologically absurd, it is pernicious.’ This thing couldn’t happen in the ? Well, we know it has already...


We should be demanding that people in power use clear simple English instead of the clichéd dumbed-down inflated and senseless drivel that so often passes for English today. We can all make a difference. Question what the writer or speaker means. Query the assumptions made. Humphreys gives us all pause for thought. Before thought too is controlled, of course.

I suspect this book won’t be a runaway bestseller like Lynne Truss’s Eats, Shoots & Leaves. But it certainly deserves a wide audience. It will amuse and annoy and, more importantly, it warns the unwary to be on guard against being manipulated by people who should know better. Interestingly, the reviews to date have been very mixed. Make up your own mind, though.

Something that's been on my mind lately - why are 'ranks' invariably 'serried'?

Well, it's bound to have been overused since its arrival in mid-17th century, I suppose. Serried = 'pressed close together, shoulder to shoulder' according the SOED. Examples given use serried for back-to-back houses and also Dirk Bogarde using 'glasses in serried ranks'...