Another work in progress. This is the beginning of a Victorian adventure. It still requires considerable research, even though it is plotted. I’ve written the first chapter and look forward to getting back to it, probably early next year. Again, feel free to comment, criticize... 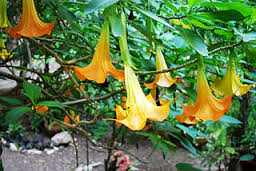 "It is a bad thing to give servants too much liberty.  They are seldom grateful," said Mrs Marguerite Cattermole as she strolled through the delightful hotel gardens festooned with the colourful and richly scented flora of Tenerife, her patrician voice raised well beyond the intended hearing of her companion, Miss Dora Marshall.  In their wake, seemingly oblivious to the beauty that surrounded them, was Mrs Cattermole's nephew, David Mordlin, his black frock-coat in need of care, his long thin nose in an open book, the high morning sun glinting on his pince-nez. "However, considering your rather theatrical entreaties, Miss Marshall," Mrs Cattermole went on, "I dare say you may take an hour off tomorrow."


She sat a few yards away in the shade of an orange tree, studying her sketching pad.


Mrs Cattermole was forthright in her views: she had already remonstrated with Georgina concerning the inadvisable habit of roaming the town of Icod de Los Vinos by herself, without benefit of chaperone, settling down wherever her artist's eye and whim took her.


Georgina sat up straight and stretched, pleased with her efforts.  With a flourish she signed the bottom left-hand corner of the drawing and dated it: 18th of May 1887.


Even sitting under this lovely aromatic tree she could feel the heat, despite her white cotton lace-trimmed dress.  She carefully removed the straw hat and mopped her brow with a handkerchief.


A shadow fell over her drawing.


"They're beautiful flowers, Ma'am.  Angel's trumpets, I reckon.  And, if I may say so, you have finely caught their likeness."  The male voice was definitely American.


She turned in her collapsible wooden chair and looked up at the dapper tall young gentleman.  The sun was high and she shielded her eyes with a hand.


"Sorry," he quickly ventured, moving out of line with the sun.


"Thank you."  She refrained from making plain whether her appreciation was for his compliment on her artwork or for him moving to a more harmonious position.  "You seem to know your plants, sir."


Removing his Panama, he bowed.  He had black hair and his blue eyes twinkled in the light, the corners creasing with his smile.  "Richard Dawes Bradbury, Ma'am, at your service."


So many Americans seemed to have strange names, she thought.  His features were tanned. A rather prominent hawk-like nose curved over a thick moustache.  His fawn-coloured suit was of expensive cut, decidedly English. A fob chain was draped across his waistcoat.  He stood quite nonchalantly, weight on one foot.


"And, Miss Hood, do you feel your artistic accomplishments are threatened by these new-fangled cameras?"


She smiled.  "One day, perhaps, Mr Bradbury. But not for a while.  Art is an interpretation, a representation, if you will, while cameras tend to show everything."


"You mean cameras never lie, but artists do?"


How forward these Americans were!  Yet she liked the verbal fencing; so much more spirited than the empty pleasantries of London.  "True lies, perhaps, sir.  An oxymoron, I am sure, but art does strive for truth - an inner truth a mere photograph cannot capture."


He bowed slightly.  "I confess to knowing little of art, Miss Hood.  Some art and the circles in the art world seem quite pretentious - yes, we have them in Boston, too - but I cannot abide artifice.  I know what I like and I greatly admire your work."


She felt her cheeks flush but was pleasantly gratified by his praise.  "Art is a great leveller these days."  She tried to keep a straight face as she continued:  "You could say it is an instrument of a new kind of class fusion. The professional house decorator is no longer a mere tradesman, and the architect and artist are socially not only acceptable in society but positively interesting!"


"Ah, class.  Yes, that disease has crossed the Atlantic too!"  He chuckled. "Who knows, one day perhaps we Americans will reverse the trend and export our mores to your English shores!"


"You must surely feel proud already, Mr Bradbury.  Haven't we already taken up your wonderful invention, the type-writing machine?"


"As I recall it was advertised recently in The Lady as a machine that 'does not overtax the physical and mental abilities of women'."


"Sounds mighty condescending to me."


She smiled, liking him for that observation.  "I thought so, too."


"And, Miss Hood, do you market your art-work?"


"Yes.  My illustrations often accompany the articles I sell to newspapers and magazines in England."


"A lady journalist?"  His tone verged on disbelief, just short of being rude.


"No, no," he hastened to mollify.  "We Americans pride ourselves on moving with the times.  Why, a few ladies are entering professions usually considered the province of men - as though marriage is no longer the natural course of things..."


"I shall just have to forego the pleasure of darning a husband's socks while he reads to me what he thinks is suitable material from his newspaper."


"You like sewing, then?"  He was grinning again, clearly amused by her irony.


She laughed. "I abhor it as a means to pass time - though admire it as an accomplished skill which sadly I do not possess."  She slipped her sketch-pad into a leather satchel.


"Might I be so bold as to ask to accompany you at dinner this evening?"  For all his seeming American brashness, he appeared quite fearful of a refusal.  She had not noticed him in the dining room before so perhaps he had arrived today, yet clearly he was aware that she travelled - and ate - alone.  She was intrigued.


She nodded and recalled her Head Mistress's dictum: "Pigeons nod, my dear.  Young ladies speak."  She smiled at the memory. "I would be delighted," she said.
***
This is about a third of the first chapter and establishes the hero and heroine who join forces to set up a detective agency.