If you enjoyed Paul Scott’s The Raj Quartet, I suspect that you’ll like Mission by Philip Spires too. The Jewel in the Crown was about a lot of things, but essentially a rape and how that affects a number of interlinked individuals. Mission covers a great deal in 1970s Kenya, but is essentially about a death and how the lives of several people are entwined. The writing style is similar, too. Another author Spires favourably reminds me of is Louis Bromfield, especially his classic The Rains Came.

The man killed is Munyasya, a retired army officer who devoted his life to his colonial masters. The book is divided into five sections, related from the viewpoints of Michael, Mulonzya, Janet, Boniface and Munyasya. Time shifts from the instant of the death to the past and also forward to the present, showing the incident’s repercussions. As Michael says, some thirty years later, ‘Sometimes things happen to you in life which are so momentous, so mind-blowing, that you never forget them. You live with them forever, vivid and clear in your mind. It’s as if you can relive them moment-by-moment.’


We begin with the death. Father Michael, a mission priest, accidentally drives his vehicle over the ageing Munyasa, who is a derelict and a drunk. Yet the old man’s demise galvanizes the local politician James Mulonzya into making political capital from the tragedy. Father Michael’s blooding occurred earlier in Biafra, and his quite shocking memories are powerfully described. Now, officiating in the village of Migwani, he strives to do good and has a dedicated helper, Boniface. Michael finds himself in conflict with many folk who prefer the ‘old ways’ and is openly accused by Mulonzya of politicising school lessons. Michael is a staunch friend of Janet Rowlandson, a volunteer working there for two years.


James Mulonzya is not only at loggerheads with Father Michael. He is against the efforts of John Mwangangi, who has returned from UK to his homeland to improve the lot of Migwani farmers. John has a wife, Lesley, who prefers the city life of Nairobi rather than that of the village. John’s problems are manifold: he becomes distant to his wife, he is too absorbed in the village project, and he cannot easily get on with his old father, Musyoka, with tragic consequences.


We meet Janet thirty years after the death of old Munyasa when she is a headmistress of a girls’ school in London and by chance she encounters someone from her past, a past that is not buried far beneath the surface because of what she witnessed. While in Kenya, she embarked on an affair with John Mwangangi, but it was destined to end when her two years were up… Here, in Janet’s school life we are treated to some wonderful one-liners – ‘… middle class families who could do without patronising advice about their diet from a politician with certainly questionable morals.’ And a truism: ‘… knowing a language was not the same as teaching it…’ The mannered meal with guests and her family is splendidly done, with telling flashbacks and surprises and a marvellous put-down for her husband, David.

Boniface showed much promise as a young man and was destined for the church. Unfortunately, he allowed hubris to dominate him and fell foul of his father who had scrimped and saved to further Boniface’s education. The family rift was merely the beginning, however, as Boniface becomes involved with Josephine. Later, Boniface and Josephine are beholden to Father Michael for giving blood that saved their child’s life. Fate decrees otherwise, however, as the child later becomes ill and Michael makes an abortive mad dash to the hospital.

Munyasya gained his education and experience from the King’s African Rifles. A respected officer in his day, he was ousted when Kenya gained independence. He was seen as a traitor to his people, more interested in adopting a European name and lifestyle. Single and without issue, he descended into a schizophrenic life where his dead stepfather talked to him and he mumbled back incomprehensively. He developed the habit of tying pieces of string to his thumb as reminders of things he’d never remember, then the string seemed to be a part of him, at times sloughed off and renewed like a snake’s skin. ‘It was a fool trying to untie another fool’s knot.’ This phrase is echoed in the title of Spires’s second novel, A Fool’s Knot, which examines in more detail the life and death of John Mwangangi. At this point we discover the real reason why Munyasya died under the wheels of Father Michael’s car.

Despite the events being trodden over by several people, there’s always something fresh to discover, a new insight into a character, a shocking revelation, and even though you think you know everything already, you read on, wanting to understand the individuals and their inner worlds, and still learn more.

The narrative is coloured by the sights and smells of a small town in Africa, the petty tribal disagreements and the long-lasting resentment of past ignominies under colonial rule. It is not a light read, but it is rewarding. It’s obvious that these characters lived with Spires for several years, he knows them so well, and by the end of the book, we do too. A memorable and quite remarkable book.


***
His second book A Fool’s Knot reacquaints us with some of the characters in Mission. 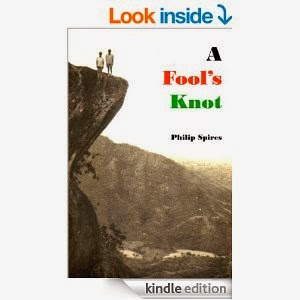