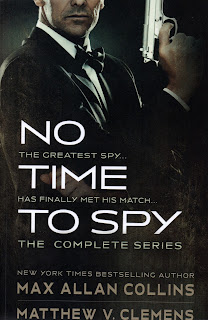 This, the first book in the trilogy No Time to Spy by Max Allan Collins & Matthew V Clemens (published by Rough Edges Press, 2021) is highly enjoyable. The authors are after my own heart with their playing with words – both book titles and chapter headings. Some chapter headings: Harbour Frights, Dominican Dominoes, The Brother-in-Lawford, and Sand Storm, for example)

The action of all three books spans from 1959 to late 1963. The central conceit is splendid: John Sand is a recently retired MI6 agent, now married to Stacey. His real-life exploits have been written as fiction by a friend and former colleague not a million miles removed from Ian Fleming. ‘Though retirement had been forced upon him by his colleague’s novels – and because Sand’s body carried more lead in it than a crate of number two pencils – he relished his new freedom.’ (p13)

Unfortunately, the past tends to raise its ugly head in the guise of an old enemy, Raven, who attempts to kill not only Sand but his wife! It is possible the attempt is connected to a secret mission the US President wants Sand to undertake – go and protect Castro from a planned assassination!

Apart from the local colour, the authors also inject the Rat Pack into the story – capturing the voice and mannerisms of Sinatra et al (yes, including Peter Lawford). The period is well-realised, as are the references: ‘Wearing a smile on a face on loan from Troy Donahue, the blond boy said…’ (p105)

There are several amusing scenes, plenty of wit and suspense, a dash or two of sex, glamorous settings, and the kind of fast-paced action we’ve come to expect in the life of a famous spy. ‘Sand let go of the assassin, a corpse now, and let him sink like the stone he’d had for a heart.’ (No spoiler page number here).

I look forward to savouring the other two books: Live Fast, Spy Hard and To Live and Spy in Berlin.