THE LAST ONE LEFT - book review 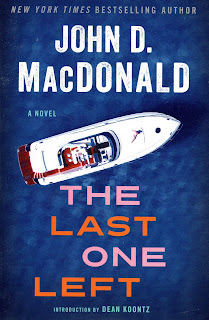 It’s a long time since I read a John D. MacDonald novel. This one was first published in 1967; my edition is the 2014 Random House copy, recently purchased. Amusingly, MacDonald dedicated the novel ‘to Travis McGee who lent invaluable support and encouragement’.

It begins and also ends with the boating couple Howard and June Prowt off the Gold Coast off Florida. Anyone who has read MacDonald will be familiar with his knowledge of sailing craft, which shows in his description of both the vessel and the state of the sea. They thought they saw a boat adrift but were unable to go alongside and then it was gone.

Staniker has survived an explosion at sea; he’d been hired to captain the boat for the Kayd family. He’s the last one left, the rest of the passengers have perished. He is being nursed back to health.

Sam Boylston, a Texas lawyer, is mourning the death of his sister Leila – she was one of the passengers on the Kayd vessel.  Leila’s husband Jonathan was convinced she was alive and planned a hair-brained search for her in the vast ocean.

Chrissie Harkinson is pleased to bed the young boat boy Oliver for she has a use for him. She also knows Staniker so naturally she visits him, just to see how he’s doing…

And so begins a convoluted but easy to follow plot that is pure MacDonald. His descriptions of characters, minor and major, and the locales are spot on, as ever. Oh, yes, indeed, there’s certainly something not right. There’s the question of a considerable amount of cash involved which might be missing… There’s also a beautiful Cuban maid with an interesting back-story, and she is involved with Raoul Kelly, an investigative reporter.

The characters are set up, the plot is unfolding and it all falls into place. And as you’d expect with one of John D.’s mystery thrillers there are murders and betrayals.

Loved it. Good to reacquaint myself with you, John D. You might have died in 1986, aged seventy, but you still excite your readers three decades later.