SYMPATHY FOR THE DEVIL - Book review 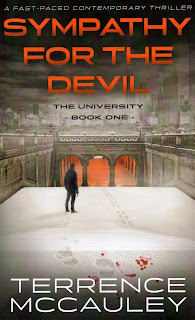 The University: Book One by Terrence McCauley is like it says on the cover, a fast-paced thriller. Highly original too.


Way back in the early 1970s there was a sci-fi detective series called Probe starring Hugh O’Brian as agent Hugh Lockwood. The series concerns the so-called World Securities Corporation, a high-tech international private investigation company that employs field operatives—the elite of whom are aided by implanted audio receivers and who carry Scanners, tiny video camera/telemetry units which can be attached to tie clips or other jewellery. The most common method is to wear the Scanner on a ring, enabling it to be discreetly aimed. Two other agents Tony Franciosa and Doug McClure. They’re in constant contact with the probe technical staff. At the time I thought this was great stuff.

Now move to the present and we have an agency that is ten or even a hundred times better than depicted in Probe. The University is a non-government intelligence network. OMNI – the Optimized Mechanical and Network Integration protocol – was now far-reaching, thanks to advances in artificial intelligence and satellite assets.

Heading The University is the Dean.

One of the Office Heads is James Hicks; he’s ex-special services and knows how to handle himself. He has worked for the Dean for almost two years but had never met him.

Hicks has access to the OMNI satellite feeds, able to spy on and listen to suspects and enemies alike. And of course OMNI can perform instant translation of languages overheard. Omniscient, indeed.

Hicks also has access to all kinds of useful people, one of whom is Roger, who is a master at interrogation. Quite a chilling creation, is our Roger.

For this latest mission Hicks is thrown by the fact that an asset has seemingly been turned against the University. Many of the assets he recruited were unsavoury men and women, but they all had something in common: they could be useful when called upon for certain tasks required by The University. In fact, as Hicks observed, ‘They’d all done things that had opened themselves to University pressure and blackmail. Any dirt he had on them was their own fault. He’d sooner have sympathy for the devil himself than for any of his potential recruits’ (p8)

There is plenty of non-stop action throughout so that the 323 pages sped by. This could become an addictive series.

Although this is a contained story, it leaves the reader wanting more – and happily there is more. Book Two is A Murder of Crows. Two other books follow... so far.