WORTH DYING FOR - Book review

Lee Child’s 2010 novel is high-suspense, one of his best in my opinion.

It started in a small town in Nebraska. A domestic disagreement. Seth Duncan punched his wife. She deserved it, according to him. Reacher happened to be with the local doctor when the call came through. He went with the doc – and discovered Mrs Duncan was a regular punch-bag.

Reacher detests bullies. So he walks to the steakhouse and punches Seth Duncan in the nose. Breaks it.

This is not good because the Duncan clan is mighty powerful in these parts. And the brothers use the sports jocks as their protectors and enforcers. They set these enforcers on Reacher – and soon come to regret it. Almost more broken bones than you’d find in a charnel house.

Apparently, the Duncans are involved in some criminal business, but nobody talks about it. Another thing nobody talks about is the missing eight-year-old girl who vanished decades ago. The girl’s mother is the elderly lady, Dorothy Coe who befriends Reacher; she’d always hoped her girl would return one day.

There’s something wrong in this town and Reacher can’t let it go. And as Dorothy Coe declares, ‘Some things are worth dying for.’ (p379) Maybe this is one of them. 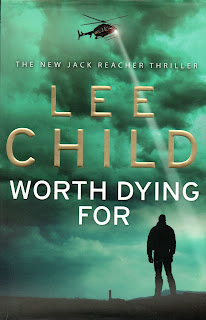