The book of the Film - ICE COLD IN ALEX 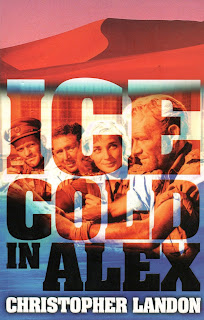 The book by Christopher Landon was published in 1957. The film was released the following year, with a screenplay by Landon and T.J. Morrison.

Briefly, Captain Anson (film: John Mills) of the Royal Army Service Corps Motor Ambulance Company is serving in Tobruk. He’s battle-weary and has turned to alcohol. The German Afrika Korps is due to take the city, so they all evacuate but in the confusion two nurses, Sisters Diana Murdoch (Sylvia Syms) and Denise Norton (Diane Clare) are left behind. Anson with Mechanist Sergeant Major Tom Pugh (Harry Andrews) take the sisters in their Austin K2/Y ambulance (nicknamed ‘Katy’). Separated from the rest of the evacuation vehicles, they set off across the desert to Alexandria (Alex). Shortly, they encounter a South African officer of the Union Defence Force (UDF), Captain Zimmerman. In the film he is named van der Poel (Anthony Quail).

Anson swears off alcohol even though Zimmerman carries several bottles of spirits in his pack. He declares he won’t touch a drop until they get to Alex.

There are a number of tense scenes in the book: crossing a minefield, a broken suspension spring which requires the formidable strength of Zimmerman to support the axel while they shove rocks underneath, the crossing of the Qattara Depression, a fatal attack by a German patrol, and a dangerous immersion in quicksand. All these sequences were dramatized at greater length and to good effect in the film. Two marked differences in the film are: the betrayal is signposted much earlier in the book, and Diana’s romantic interest is not Anson but Pugh.

It’s probably not a spoiler to reveal that, after many trials and tribulations, they do get to the bar in Alex! The cover image from the film reveals it, after all. The lager they drink is Rheingold (an American beer); of course in the film they drank the Danish beer Carlsberg; real beer was used and after several ‘takes’ Mills confessed to being rather giddy.

One of the German officers who waylaid them was played by Walter Gotell, who went on to appear in many James Bond movies.

Landon’s prose is reminiscent of Hemingway, very spare and direct. The viewpoint changes for (mostly) chapter-lengths from Anson, to Diana, Zimmerman and mainly Pugh. It is obvious from his descriptions that Landon had served in North Africa, which is the case. He wrote several novels and, sadly, died from accidental alcohol and barbiturate poisoning in 1961, aged 50.

If you’ve seen the film, you’ll still enjoy the book.