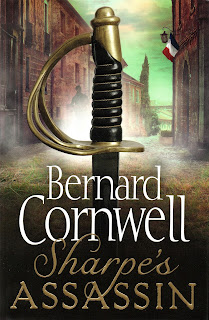 Sharpe’s Assassin is Bernard Cornwell’s twenty-second Sharpe novel (number 21 in his timeline/chronological sequence), his first Sharpe book in fourteen years. This tale follows immediately after Sharpe’s Waterloo (1990). Needless to say, we know Sharpe survives, since he appears in Sharpe's Devil (1992) which takes place some five years after Waterloo.


At Waterloo Sharpe lost a number of his chosen men and the story begins with our two heroes, Patrick Harper and Sharpe burying Daniel Hagman. He is summoned by the Duke of Wellington.

The Duke gives him the task of freeing some prisoners from the citadel at a nearby town called Ham. One prisoner in particular is important, an Englishman called Alan Fox. It’s considered a fool’s errand. But it is necessary. As the Duke says, ‘For this job we need a ruthless bastard.’ And that’s Sharpe.

While he’ll be away Sharpe’s battalion is handed over to a newly arrived Major Morris. This is not good news. Years ago Morris was responsible for Sharpe getting flogged for something he didn’t do. Now, however, Sharpe outranks Morris.

All Sharpe wants to do is retire to Normandy with Lucille, his common-law wife. After this last task, perhaps?

Yet the assault on the Ham citadel leads to the revelation that a cabal of Frenchmen have organised to wreak havoc on the occupying forces, with the intention of assassinating British high-ranking officers, in particular Wellington. Sharpe and Harper enter occupied Paris in search of this evil fraternity.

As with the earlier Sharpe books, the fiction is laced with historical events, lending added authenticity.

Throughout, the voices of the TV series’ actors resonates in the dialogue. There’s blood and gore aplenty, clever tactics to confound the enemy, lashings of humour at the expense of the French, honour and betrayal, and bold and foolhardy bravery.

Welcome back, Richard Sharpe! You’ve been away far too long.