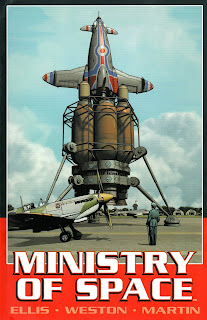 Way back in 2001 I purchased the first two Image comics in a trilogy with the overarching title of Ministry of Space. For some reason I never managed to get hold of the third concluding part.

Being a reader and fan of the Dan Dare stories from Eagle, I was drawn to this comic because its artwork appeared to be paying homage to the greats Hampson and Bellamy.

The story begins in 2001 in an alternate history, where England had already conquered space, complete with the space station Churchill. Great Britain’s Ministry of Space is headed by Professor Dashwood. He’s being alerted that the Americans are finally going to launch their own spaceships. Then there’s a flashback to Peenemunde, 1945, where the Americans are secretly bombed by the British, denying them the space rocket secrets… The story moves through the 1950s and 1960s to the colonisation of Mars. The dark mystery as to how Britain stole a march on the allies in the race to space is slowly revealed...

Weston’s artwork is excellent. The detail in every page is simply outstanding. There are several splash pages that enhance the story: for example when Dashwood’s experimental rocket crashes into a windmill – you can virtually see every splinter of wood!

Note: Warren Ellis is the author of the graphic novel Red  - a Bruce Willis movie - among countless other comics.