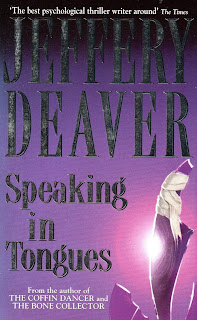 Jeffery Deaver’s 1995 psychological thriller Speaking in Tongues didn’t get the paperback treatment in UK until 1999. The back of the book offers up a small mystery: ‘Filled with the brilliant twists and turns that are Jeffery Deaver’s hallmark, this is the long awaited, completely revised paperback debut of his classic thriller.’ The mystery is – what was ‘completely revised’?

Meghan is a troubled teen and is marginally schizophrenic. She is attending a session with her therapist; only it’s a new guy, Aaron Matthews. He’s much better than the usual fella, bald Hudson. Smooth-talking, approachable – until he injects her with a drug that knocks her out.

For several years Meghan’s parents have been separated. Mother Bett has had a string of failed relationships. Father Tate Collier is a retired lawyer who spends his time on the family farm and barely sees Meghan from one month to the next. Tate was a glib talker when in the courtroom. So there are two men who both have a way with words that can convince.

Ostensibly, it seems that Meghan has run away from home, having left an accusatory letter. But it doesn’t seem quite right. Tate calls in favours from friends in law enforcement. Gradually, it dawns on them all that Meghan has been abducted. Worse, people who might have been in contact with Meghan just prior to her absence start dying…

The past is coming to haunt Tate…

This is yet another edge-of-seat Deaver thriller, told mainly from the point of view of Tate, Bett, Meghan and Matthews. Nobody seems safe.

Un-put-down-able all the way to the end.