Connie Monk’s fourth book Hannah’s Wharf was published in 1987; she has published at least 35 novels. 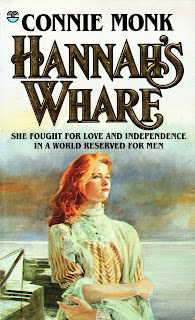 It’s the mid-1800s. Thirteen-year-old Hannah Ruddick is left an orphan and is sent to Deremouth in Devon to live with Aunt Louise, a cantankerous old woman who does not seem fond of children and can only get about with the aid of two walking sticks. Unlike Hannah’s father, who barely scraped a living by writing poetry, her widowed aunt was rich, owning a large house, the Hall, and the Netherton Shipping Company.

Hannah is taken to her aunt by the gardener Harold Thurlston, who lives in the gatehouse. Harold has two daughters, Kath and Beatrice, both of whom she befriends, which helps her assuage the inevitable loneliness in unfamiliar surroundings.

Aunt Louise is a fine creation who the reader and of course Hannah come to like and then even love.

Then Hannah meets Daniel Lowden, the godson of Louise, and an attraction is formed, though there is a disparity in their ages and they therefore treat each other simply as friends. Daniel is the master of a ship that puts in to the Netherton quay from time to time for loading and unloading.

In her wanderings, Hannah walks to the quayside and encounters Mr Alan Webster, Aunt Louise’s company manager. Webster has a wayward son, Tommy, who doesn’t show an interest in taking his father’s job. He is a handsome fellow and knows it.

As time passes, Hannah convinces her aunt that she would be more gainfully employed helping Mr Webster in the office. And so it proves; she is a natural, learning the ropes both literal and metaphorical. Author Connie Monk divulges enough about shipping, ship construction and the vagaries of the sea and sailors to satisfy most readers.

This is a well-described period piece with engaging characters and enough plot to keep you turning the pages. Here you will find heartbreak, deceit, and tragedy as well as uplifting moments.

The relationships between Hannah, Louise, Daniel, Alan, Tommy, Kath and Beatrice become complicated so that not much runs smoothly for Hannah, yet she remains constant and determined throughout.

A worthwhile read, with memorable characters.