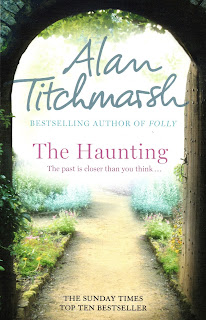 This is Alan Titchmarsh’s eighth novel (published 2011) and the first of his that I’ve read. Titchmarsh is a gardener who became a broadcaster in TV and radio. His first novel was published in 2001.

The Haunting (an over-used title) is an episodic tale alternating between two time periods: 1816 and 2010.

In 1816 a housemaid Anne Flint goes missing at the same time as the daughter of the local lord is found dead by the stream. The mysterious death is compounded by the fact that the dead girl is wearing Anne’s clothing…

In 2010 history teacher Harry Flint is nearing the end of his tenure at St Jude’s School. He is still recovering from a failed marriage and purchases Mill Cottage where he will spend his time with his many books and tracing his ancestry…

Gradually, with consummate ease, the mystery is resolved.

The book relies on several coincidences, but that’s no bad thing. Life is full of them. The same goes for the plethora of clichés – people use them all the time.

The characters, both main and subsidiary, are rounded and interesting. There’s humour and pathos, and humane warmth. Certain unsavoury aspects in the past are dealt with off-stage.

The recounting of a death is restrained and very affecting.

Titchmarsh excels in description of both place (especially evocative with his broad knowledge of plants and trees and wildlife) and character: viz.

April 16, 1816: ‘Air as clear as crystal; the sort of day when the whole world seems to sparkle and glisten – freshly laundered by a shower of rain, buffed up by the gentlest of breezes and then polished to perfection by clear sunlight.’ (p1) Then the same words are used for April 16, 2010 (p11). Emphasising parallels in time.

‘Around her shoulders lay an elaborate wrap that had seemingly once belonged to a member of the fox family blessed with three heads and five feet, and upon her head sat a collection of feathers which, had they been seen in the road, would have been identified as an unfortunate thrush who had come off badly in an argument with a coach-and-four.’ (p143)

Author intrusion is not greatly apparent until the last (ill-judged) paragraph.

I intend to read another of Alan Titchmarsh’s books – The Scarlet Nightingale (2018) soon.