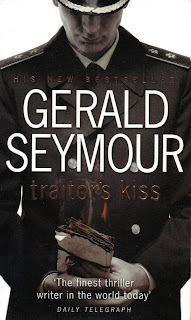 It’s a few years since I’ve read any Gerald Seymour thrillers; I’ve had Traitor’s Kiss on my shelf since 2004, its date of paperback publication (originally published 2003). I have yet to be disappointed in one of his novels, and I’m happy to write that this is no exception. Even when some feature a downbeat ending, I’ve appreciated the storytelling, the research, the characters and the honesty in the writing.

It begins in 1998 when a Russian officer hands over a wad of secret papers to a British trawlerman in the port of Murmansk. The papers are delivered to SIS operative Rupert Mowbray; genuine details from Captain Viktor Alexander Archenko, Russian Navy.

Some five years later, a dead drop by the Archenko doesn’t happen. The SIS handlers fear the worst: their contact is blown. But Archenko isn’t, though he has detected security men shadowing him. So begins a race against time – before the net closes in on a useful asset.

Some in the higher echelons of SIS consider the asset is a lost cause. But this goes against Mowbray’s sense of honour: he wants to organise an operation to get Archenko out.

As the Mission Impossible team is unavailable, Mowbray seeks the help of ex-SAS men – Billy, Lofty, Wickso and Ham – to extract Archenko from under the noses of the Russians. Closing in on Archenko is Lieutenant Colonel Yuri Bikov, an experienced interrogator.

At just over 500 pages, this tense thriller is a fast page-turner, all of it believable. Helping Mowbray is Alice, who was at the first clandestine meeting with Archenko all those years ago. She’d fallen in love with him and was now with Mowbray and the extraction team heading for Kaliningrad. All the familiar tropes are here – intelligence hardware, tradecraft, weapons, insider knowledge of the Russian naval system, soul sapping suspense of constantly being aware of being a traitor, the justification for the deceit, the bravery and heroism of the various protagonists.