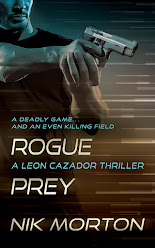 Each hunter has the same equipment—a sniper rifle, five bullets and a machete. An even killing field.  A corrupt organization in Spain is selling the ultimate thrill. They cater to rich amateur game-hunters who hunger for the privilege of stalking and killing human prey. Their targets are non-persons. In effect, the vile process gets rid of illegal immigrants. Enter Leon Cazador—a half-English, half-Spanish private investigator who occasionally assists the authorities. Eager to take down this immoral organization, he’s tasked with going full cloak-and-dagger. But when his cover is blown and he’s forced to join nine other captives, will he become the hunters’ ultimate prey? 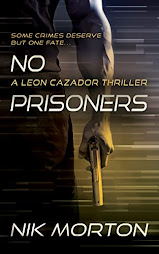 When Leon Cazador discovers the body of a fellow investigator who was working with the British National Crime Agency to infiltrate a pedophile group that uses the pursuit of golf as a cover for their organized abuses, he refuses to chalk it up to coincidence. Seeking justice for his fallen friend, Leon is presented with another missing person’s case. But this one is decidedly different. Diving deeper, Leon finds himself one step closer to uncovering the deadly pedophile ring that took down his comrade. Finding missing persons is all in a day’s work for Leon. But can he fight his ultimate nightmare in a race against time to save a group of innocent children and exact revenge on their abusers?

Leon Cazador is on FBI liaison duty in Charleston, South Carolina when a dead child is found with a kidney missing. Suspecting an old foe, he jumps into action when a convoy of trucks with kidnapped children hits a snag, and a boy escapes. But what starts out as a simple cat and mouse chase turns into a convoluted web of deceit involving an underground organ transplant ring that surpasses Leon’s wildest expectations—and abilities. Years later—and carrying around the weight of unresolved burdens—Leon runs into suspicious activity in Córdoba, Spain that makes his heart stop cold. Organ traffickers are running rampant, and a three-man investigating team has gone missing. Eager to put an end to this corrupt organization’s misdeeds once and for all, Leon makes finding its leader his top priority. But will he have what it takes to bring an evil like no other to its knees?

Paperbacks will be available on the above dates also!