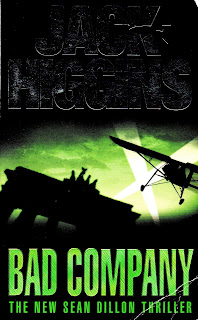 This is Jack Higgins’s eleventh Sean Dillon thriller published in 2003 and overall it is, sadly, a bad book.

I have read very few Dillon novels so found the rehashing of earlier escapades helpful, notably his involvement with the Rashid family, but really for any fans it must have felt dire to have it all regurgitated again as filler. The most interesting aspect for me was the background to von Berger’s wartime German past, because Higgins did his wartime descriptions very well.

The idea of a secreted diary dictated by Hitler which reveals negotiations between the US President and the dictator was essentially a Hitchcockian MacGuffin. Len Deighton did something similar with a secret meeting between Churchill and Hitler in 1981 (XPD).

Even the action is fleeting without giving any sense of 'being there'.