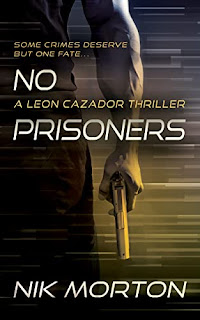 The beginning of the first chapter of No Prisoners started as a proposed short story entitled ‘Golf Lynx’ – like many stories based on Leon Cazador’s cases, this title was a play on words. Leon finds a body in a golf course sand bunker. The ending was more or less envisaged as well. Inevitably, when I was asked to write a second Leon Cazador novel, I immediately opted for these scenes to be incorporated. So all I had to do then was plot and write the (considerable) middle!

If a series of novels was going to work it was clear that Leon needed a personal assistant or secretary, a sounding-board, someone who could become his sidekick. Some years ago he had worked with an undercover cop Carlota Diaz. She seemed like a likely candidate.

Carlota Diaz had high cheekbones which flushed at sight of him. Her chestnut-colored eyes shone as she rose from her reception desk. Tall and attractive, she was from northern Spain with the fair coloring from her Celtic ancestors. Her strawberry blonde hair was tied back in a chignon. She wore a fetching white poplin top and a lacy black bra was visible through the material. Her black skirt hugged a narrow waist and broad hips. He’d made a point of memorizing her birthday from her CV; she was twenty-four yet had a mature head on relatively young shoulders, which had served her well in the police – until she was shot in the leg by an escaping felon. Afterwards she’d been offered a desk job but she decided to resign instead. Leon made her a better offer.

She sidled round the desk and limped up to him, her warm and smooth hands clasping his. “I waited in for you.”

“Thank you. There was no need.” He gently released her hold and shut the door. He was pleased to see her. She was always full of life, a beacon of hope in the gray world he tended to inhabit.

They had a good relationship, despite the difference in their ages; God, it didn’t bear thinking about: he was thirty-two years older! His heart held a special place for her, but they had not taken it further than the occasional kiss. That age difference inhibited him.

For this book and the next, then, Carlota plays a prominent role.

The storyline for the intended short story had been about pedophiles, a particularly nasty group of individuals. Though Leon had no children, he had a niece, so would have dreaded her falling into the clutches of such people. As he becomes sucked into this dark world he declares to Carlota that he had no intention of taking any prisoners: that’s how strongly he felt.

Excerpts from No Prisoners

Surprisingly, quite a few investigators were hired by Spanish families to keep an eye on their teenage sons and daughters. The rise in street crime and drug use was an ever-present worry for responsible parents. If the kids were sucked into crime, the shame could be devastating to the family; and the future for the kids was going to be bleak.

Villains view undercover cops with extreme malice and drastic prejudice. Though not always while undercover using one of his aliases, Leon acknowledged he would be dealing with individuals who would kill. Those who had killed or were happy to order a murder.

Now, the Paseo Vistalegre is attractive and modern, but it wasn’t too long ago that it looked as though it had recently suffered its own little earthquake. Then a mindless vandal deprived the statue band of their trumpet:  I know where I’d like to stick the instrument if I ever found the culprit, Leon thought. However, the band had now been re-sited and a new trumpet restored. Never let the senseless idiots win.

Leon wasn’t surprised. Spain had an unfortunate reputation for domestic abuse; officials postulated that many men cannot handle women’s new-found independence, which to Leon seemed odd since freedom for women began decades ago, when the old regime died with Franco in 1975. Yet denuncias for domestic violence in the Alicante province alone had tripled in the last ten years... Leon tried to keep clear of those cases. Basic adultery – by either party – was fair game and less dangerous than many of his other capers; it helped create the illusion that such work paid the bills. He was careful about where his considerable wealth actually stemmed from, since it had been illegal. In truth, he didn’t trust himself where domestic violence was concerned. Usually the culprit was the man – and Leon knew he’d been tempted on those rare occasions when he’d been involved to teach the bully a severe lesson, which could have put him in court or even get his license revoked. He detested bullies of all shades.

From the closet Leon took a black silk long-sleeved shirt and put it on . He kicked off his shoes, unbelted his pants and replaced them with a black pair of cargo pants. Carlota was unfazed. The first time he’d needed to change in a hurry, he’d asked her to go into her office. She’d complied but halfway through changing she’d entered with an urgent phone-call. “Don’t worry,” she’d said, “nudity is no big deal.” So this wasn’t the first time he’d undressed in front of her. Nor would it be the last, he suspected. He shrugged into his shoulder holster, checked the Astra and then the Colt in his ankle holster. He selected a pair of black rock hopper neoprene shoes from a closet shelf and fastened them. She delved into a filing cabinet and handed him two magazines for each gun.

Myriad stars and a full moon shone in the deep blue night sky and reflected in the waters of Marsaskala Bay. Other reflections, from the odd occupied moored boat and buildings, bars and restaurants, diminished the magical effect. Dressed in their gray-and-black wetsuits and wearing their buoyancy compensators, an air tank each, and neoprene gloves and footwear, Leon and Carlota carried the rest of their scuba gear down to the rocky shore. Here, in the light of the moon they did their pre-dive checks on each other – air switched on, all quick-releases and straps secure, visible and within reach, and contents gauges showed “full”. Then they put on their fins and face-masks and swam a short distance into the wide bay and then submerged.

Cazador considers the perpetrators of some crimes deserve only one fate, and that means no prisoners!