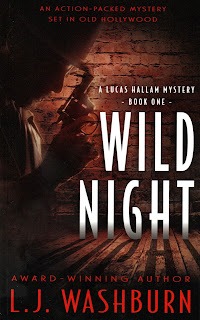 L J Washburn’s first mystery novel about private eye Lucas Hallam is a highly enjoyable read. A while back I read Washburn’s short story ‘The Battle of Edendale’ in a mammoth collection of stories entitled The Untamed West. That was my first introduction to Hallam and my review of the book included this observation: I’d like to read more about this guy! And at last, now I have, and it was rewarding to renew my acquaintance.

Hallam is an ex town marshal, ex Texas Ranger, ex Pinkerton and now a P.I. in the Hollywood of the 1920s, rubbing shoulders with western stars of the period, including Tom Mix and William S Hart, and he even finds time to act in some flickers. He still carries a Colt Cavalry .45 and a Bowie knife. ‘Time was, I was considered a mite wild and woolly.’ (p144) He’s getting on in years, which is a fine touch: ‘… there had been too many years, too many wounds.’ (p146)

Hallam is employed to protect a local evangelist, Reverend Elton Forbes, founder of the Holiness Temple of Faith. Then, during a scheduled meeting with a disgraced movie director called Wallace, the night turned wild. Wallace and his henchman were shot dead and Forbes was found with a smoking gun. Yet Forbes pleaded innocent. Hallam agreed to investigate on behalf of Forbes.

It appeared that Forbes had good reason to murder Wallace. However, there was no shortage of candidates for the killing of Wallace, an unsavory character. Then again, Reverend Forbes was not particularly popular either and could have been framed.

This is the Hollywood of scandal – the Fatty Arbuckle case is fresh in memories; however, the salaciousness and graphic goings on are not described in any lurid detail, yet taint some individuals nevertheless.

What makes this mystery satisfying is its fast pace, the authenticity of the period depicted and the character of Hallam.

‘Lucas Hallam had been good, all right. One of the best, people said. But those days were twenty years and more in the past. Hallam tried not to reminisce too much; a man could get lost in bygone days and not pay enough attention to what was going on around him now. The way he saw it, he had a lot of living to do. Daydreaming was a good way not to get around to it.’ (p3)

‘The detective business sometimes made you feel lower than a snake… You had questions that needed answers, but to get the answers you had to dig around in people’s feelings and stir up things that would just hurt them.’ (p115)

Throughout, besides dry humor, Washburn throws in telling phrases: ‘There was more brewing in this old house than coffee.’ (p225) And ‘Wasn’t the first time he’d walked down a road with a gun in his hand, and one thing never changed. Walks like this were always long ones.’ (p243)

As with many classic P.I. novels, it’s the past that often comes back to bite you.