Today, 15 December we see the launch into space of the Soyuz TMA-19M spaceship, destined to rendezvous with the International Space Station that has been in operation fifteen years.


Onboard are veteran cosmonaut (six spaceflights) Yuri Malenchenko, NASA’s astronaut Tim Kopra and British Major Tim Peake. [What are the odds on two Tims being crammed into the space module!]


The blast off was perfect from the Baikonur cosmodrome in Kazakhstan. [Of interest to me, at least, Kazakhstan is where the psychic facility is situated, as featured in my 1970s spy e-books The Prague Papers and The Tehran Text, published by Crooked Cat!]

Coincidentally, and of much less moment, today sees the launch of the third ‘Avenging Cat’ adventure, Cataclysm.


The e-book can be ordered through this single link (that covers all countries’ sites):


The first two novels in the series are:


Interesting, that the first Briton in space was Helen Sharman, who trained as a chemist. That was way back in 1991, and she spent about eight days in the Mir space-station. Why interesting? Well, Cat Vibrissae, the heroine of the ‘Avenging Cat’ series also trained as a chemist – but then went into modelling, as it paid better, thereby funding her vendetta against Cerberus and its owner, Loup Malefice. She also happens to be pretty good at free climbing and taekwondo. 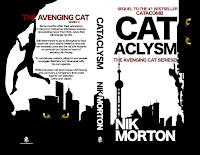